"Your son has leukemia”

Audra and Marc Joseph always breathe a sigh of relief when the pediatrician gives their four kids a clean bill of health after annual checkups. But two and a half years ago, not long after their 5-year-old son Jake had been to the doctor, he started to feel lethargic, was quite pale and had developed several bruises on his legs.

“I figured he might be anemic and that the bruises were a normal part of a rough and tumble play with boys,” said Audra, who lives on the West Island with her family. She took him to a doctor who thought Jake was likely fighting a virus. But a few days later, when the family went out for ice cream, Jake was listless and flopped over into his dad’s arms. At that point, the parents knew it had to be more than a simple virus.

Audra called the doctor and asked if he could write a requisition for Jake to have blood tests. On the same day they brought him for blood tests, they received a call that would dramatically change their lives. “You need to take Jake to the Montreal Children’s Hospital right away,” the doctor from the CLSC said. “It is urgent – it has something to do with his white blood cells and I’m not at liberty to say anything more.”

Within an hour of arriving at the hospital, they were told that Jake had leukemia. The young boy was rushed into intensive care and underwent a spinal tap, bone marrow extraction, dialysis and blood transfusions. It was a critical period – Jake was monitored by a nurse around the clock and the doctors didn’t know if he was going to survive.

Jake pulled through but had to be hospitalized for the next 18 months (except when being given the odd day pass). Audra moved into the hospital to be with him for the duration of his treatment. Marc took over duties at home while working as an entrepreneur trying to get a business off the ground. He also became a pseudo single parent to then 2-year-old Lola, 9-year-old Mason and 11-year-old Ryan.

The early days were very tough. One night, she and Marc were talking on the phone and he asked his wife, the emotional yin to his stoic yang, how she was able to keep it together. “The difference between you and me right now is perspective,” she told him. “When you come in to the hospital room, you see a child who is dying, a victim. I see a fighter who is going to battle this condition and win. He is going to heal, grow old and have kids.”

The next time Marc showed up at the hospital, he brought a shield and sword and gave them to Jake. He dubbed his son a Spartan, and told him he was a fighter, that he would beat the cancer.

Through it all, Jake has been a brave patient. There were tears with the initial poking and prodding but he saw other sick kids in the hospital and was determined to be a positive role model by demonstrating courage and strength.

After several tests, the parents were told that there are many types of leukemia and that Jake’s is the most understood and treatable kind. His protocol is for 3 ½ years and he continues to take oral chemo and two other medications.

In theory, Jake should also be at the hospital once a month for additional chemotherapy and every three months for spinal taps, but in practice the frequency depends on his blood count. Regardless, he’s living at home, doing very well and back at school.

During the 18 months at the hospital, Audra and Marc fought to keep themselves united as a couple. After the head nurse told them that this type of crisis often breaks up families, they made a pact. “We shook hands and said we would do what we needed to keep our relationship strong and stay together,” Audra said. “It was important to us and the kids needed us.”

But living separate lives wasn’t easy and, with three other kids to look after, there wasn’t a lot of time for each other. But they would make sure to go on the “occasional date”, which consisted of spending short periods of time chatting in the hospital lounge.  They also maintained regular contact by phone and Skype.

Marc says the kids were selfless when Jake and Audra were gone – they didn’t complain about having to pitch in or about dad’s cooking, but there was no hiding their feelings of missing their mom and brother.

When they moved back into the family home, it took everyone a bit of time to readjust.  Audra had to get reacquainted with her daughter, Lola, who was a toddler when she left and whom she didn’t see very often because she was not permitted on the ward of the hospital. And the older boys had to get used to having mom and Jake around again. 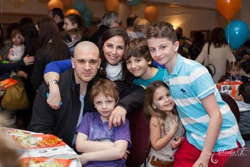 Now, when any of the Joseph kids need to get vaccinated, go to the dentist or undergo any procedure that used to scare them, they face it head on. “Call it the Jake effect,” Audra said. “They’re braver because of this. They wouldn’t be the same kids if this hadn’t happened.”

Audra says this experience has broadened the scope of what she thought she and her family could handle, and taught her about accepting help from others and giving back. (She and Jake organized a fundraiser for a sick girl at the hospital).

She believes it’s how the family chose to deal with Jake’s cancer, by being honest, transparent and highlighting the positive that helped them get through it. “We talked about every radiation or chemotherapy treatment in context of an adventure – I would tell Jake that we are like superheroes.”

The parents were open and honest with the other kids, telling them what they knew, what they didn’t, and how things would change.

And they made a concerted effort to emphasize the positives, which helped the kids adopt a similar mindset. “We believe we are fortunate because Jake has a 90 per cent chance of survival and there are other people who are much worse off,” she said. “We’re determined to suck every ounce of good that we can out of (this experience). We aren’t in control of what happens to us but we are in control of how we perceive and handle any given situation.”