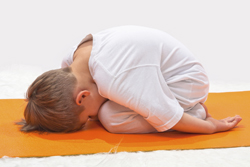 The class of girls from Grade 4 is just finishing their warm-up, giggly and bubbly with energy, when Jennifer Mallin begins, “Once upon a time…” A hushed murmur of “yes” permeates the room as all the girls quickly sit down, their faces rapt, attention completely focused on the instructor. As Mallin weaves her story, she guides the girls into various yoga postures inspired by the actions of the tale. Many of these girls have been taking yoga classes since kindergarten, which is a weekly extracurricular lunch activity at École Buissonnière.

Mallin makes the classes enjoyable for kids by using a combination of storytelling, games, guided meditation and humour. She begins each class by asking her students to line up outside the door. No one is allowed in until everyone is calm and quiet. If even one person whispers, they all have to go back out. This method teaches collective responsibility and encourages the children to reach a state of personal control before entering the studio. The children are not required to be silent the entire class but they are encouraged not to talk while in the poses, so they can focus on themselves. This is not easy for every child and, when they stray, Mallin gently guides them back into focus with soft reminders or tender chiding.

In contrast to an adult yoga class, Mallin doesn’t confine the structure of her class to just yoga postures. Often she will do art, acupressure and games, or the group will just sit and talk. These activities, while not part of any yoga manual, are used to impart tenets of yoga philosophy such as not harming yourself or others and learning to love oneself.

Angie Continisio, a preschool teacher and yoga instructor for kids, also incorporates art, games and stories into her yoga classes. “Yoga for kids is about them exploring themselves and the world around them,” she says. “We want to explore their feelings.”

Continisio and Mallin say they feel that yoga is beneficial to children both mentally and physically and allows them to develop tools they can use in everyday life. For instance, yogic breathing emphasizes breathing into the belly, a technique they say is calming during times of stress that also results in a reduction of anxiety and depression. The yoga postures also promote flexibility and strength as well as fostering an inner awareness that builds confidence and reduces feelings of anxiety and depression.

In William J. Broad’s 2012 book The Science of Yoga, the author cites a 2007 study conducted by researchers at the Boston University School of Medicine, which demonstrated how yogic breathing and postures affect the nervous system and the brain’s neurons. The researchers discovered that yoga raises the levels of the neurotransmitter gama-animobutyric acid (GABA) in the brain, which can have a calming effect on the mind.

“Kids are so stressed out these days; they often ask me if we are going to relax during class,” Mallin says. “I always tell my kids that they have more than full-time jobs; they go to school, have extracurriculars and then do homework.”

Yoga is also advantageous for kids with special needs. Both Mallin and Continisio have used the practice to help children with different abilities improve their minds and bodies. In particular, they have both worked with children who have cerebral palsy. These children cannot do the postures themselves and so the teachers use their own bodies to guide them into poses that help alleviate constipation, improve blood flow and strengthen core muscles.

Children with mental delays benefit from doing the poses that involve using the opposite arm and leg – this creates connections in the brain that allow for improved coordination.

Continisio’s classes are very active. She plays games like “freeze yoga,” in which the kids run around until they are directed to freeze in a yoga pose. She will also animate poses so that children feel less awkward if they can’t do them fully. For instance, she tells children that if they fall in tree pose it’s because the wind has knocked them down.

Mallin holds her students’ focus by telling them a story and weaving in yoga postures that align with the action in the plot. If the character is crossing a bridge, then all the children do the bridge pose.

Both teachers set aside time to concentrate on proper breathing. Mallin has shown her kids where the lungs are in the body and how they stretch down to the belly. She encourages them to breathe into each part of the lungs by guiding them in inhaling into the bottom, middle and top of the lungs and then repeating this when exhaling. Mediation also plays a large role in these classes; it lasts one minute for every year of the child’s age.

Yoga is a great form of recreation because it emphasizes the non-competitive spirit, and focuses on the wonders of one’s own body. It can also help reduce stress and anxiety but is only beneficial if the child wants to participate.

Continisio suggests that parents introduce yoga to their children before signing them up for a series of classes. She recommends looking at videos or checking out a yoga book for kids.

YogaKids – Educating the Whole Child through Yoga
by Marsha Wenig

Like a Fish in Water – Yoga for Children
by Isabelle Koch

Yoga for Youngsters
by Kat Randall

The ABCs of Yoga for Kids
by Teresa Anne Power