There were many things that excited me about moving to Montreal, but winter driving was definitely not one of them. Coming from Vancouver, whenever there was enough snow to cover the road we would just call a snow day. There was no point in slip-sliding in your summer tires down all those hills when it’s all likely to melt away by the following day.

I was determined to make it as a Montrealer, but quickly learned that there isn’t just one kind of winter driving. The first snowfall of the year is like a Vancouver snow; too many cars with summer tires, plows are slow to come, roads are greasy and slippery, and everyone seems to forget how to handle driving in the white stuff. A few weeks into winter, and a few centimetres of snow is no big deal. But then come the whiteouts and the ice storms, and it’s a whole other ball game.

The only way to build confidence driving in winter is learning and practicing good technique. Enter former pro racecar driver Claude Bourbonnais’ Winter Car Control Clinic, which provides a safe place to experience the feeling of spinning out on the ice, and find out how to recover from it. 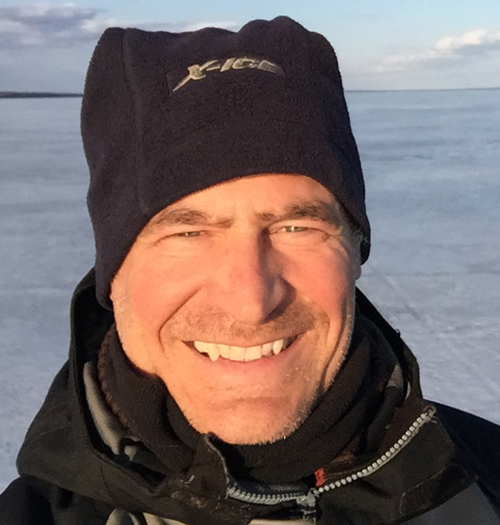 Bourbonnais (pictured right) offers a four-hour preventative driving course on the ice at Lac des Deux Montagnes (near Vaudreuil). Participants drive out in their own cars among the ice fishing huts to a cleared area with room to speed, weave, spin and circle. Over the course of the clinic, drivers learn techniques for better control, and then put those techniques into practice in various driving challenges.

The goal is to give people more confidence about driving in winter, and familiarize themselves with the feeling of sliding and recovering on ice so they are less likely to panic if it happens while on the road. “There’s no time to think, there’s only reaction time,” Bourbonnais said.

According to Bourbonnais, good winter tires are the biggest factor in how well a car handles on icy roads.

“After three years they start drying up. Even if they don’t have much wear, they’re as hard as hockey pucks,” he said. “They’re softer than a summer tire, but they wear out quicker and over time they harden. I sit in a lot of cars and I can feel the difference in grip and traction.”

The winter driving clinic costs $220 per person and is offered seven days a week, weather permitting, from 1 p.m. to 5 p.m. A morning session is also offered on the weekend, from 8 a.m. to noon. A two-hour refresher session is also offered for former students who want more practice, at a cost of $100. For those looking for more of a thrill, Bourbonnais also offers sport driving sessions where you can race around a track on the ice.