Home / September 2013 / Why cell phones are vital for teens 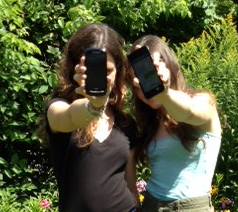 When we were younger, discussions about cell phones with our mom tended to go something like this:

Of course, the reason was not always ‘because I said so’. Sometimes it was because we weren’t old enough, we weren’t responsible enough and we didn’t need one. She said when we turned 12, she would think about it.

We were cynical. She had made us wait four years longer than originally agreed upon to get us a dog. So we understood we might be in for a wait, and we took every opportunity to relay the news of this injustice to anyone who cared to listen.

However, much to our surprise, we did, in fact, get our first cell phones when we were 12 years old. Our mom and dad never told us what we did to deserve this tremendous reward, but our best guess is that we had simply grown older.

It’s also possible they realized how big a part these little digital devices play in the lives of today’s teens. In fact, we think it’s vital that parents understand more about why cell phones are so important to us. So here we go:

Phones are a social lifeline. Teens are naturally social, despite what you might think after seeing us hunched over our phones apparently ignoring people around us. In fact, we’re actually chatting with our friends — but we’re just not using our voices.

We talk with our friends via text message for an average of two hours a day, usually more. Yes, it is on a device and is not face-to-face, but that’s the way teens communicate these days. We text because it is the easiest way to contact our friends. Giving your pre-teen or teen a phone is giving them a way to socialize with other people, and we believe this is really important.

Phones help give us independence. We grew up in a family where skiing was an important winter sport. Every year, our weekends were spent on the ski hill instead of the couch in front of the TV. However, whenever we raised the subject of skiing alone with our friends, our parents came up with excuses like the possibility of an accident happening with no adult around to help.

But when we got our phones, they also agreed to let us ski with friends and no parents. Now this wasn’t exactly full freedom as at first, we had to text our parents just about every minute to tell them where we were. Yet it was a reasonable compromise between the freedom we wanted and our parents’ overprotectiveness. In other words, cell phones give teens the experience of independence without completely cutting them off from worried parents.

Phones help teach responsibility. What separates a teen from an adult? Well, apart from the awkward stages of puberty, acne, and the right to vote, many people would point to the issue of responsibility and maturity. Those are qualities that are apparently easy to find in adults but hard to find in teens. In fact, people seem to think they are mysteriously bestowed upon you once you become ‘of age’, so to speak. But that’s not true — they need to be learned through actual experience.

Cell phones help to teach teens these magicical traits. A teen carrying a prized smartphone is going to try to avoid dropping it and cracking the screen, or leaving it on a bus, thus teaching her responsibility. Most kids are going to do everything they can to protect a gadget that is so central to their social lives. Teens also have to learn maturity when it comes to communicating digitally, because sarcasm doesn’t always come across in a text message and it can be easy to inadvertently hurt someone’s feelings.

Giving teens a cell phone (as well as some guidance from parents)  lets them learn these important lessons alongside their peers through trial and error.  Giving a 12-year-old a cellphone might carry some risks, but it also has benefits. That’s why we’re grateful our mom and dad decided not to wait until we were 18 to finally get us one.