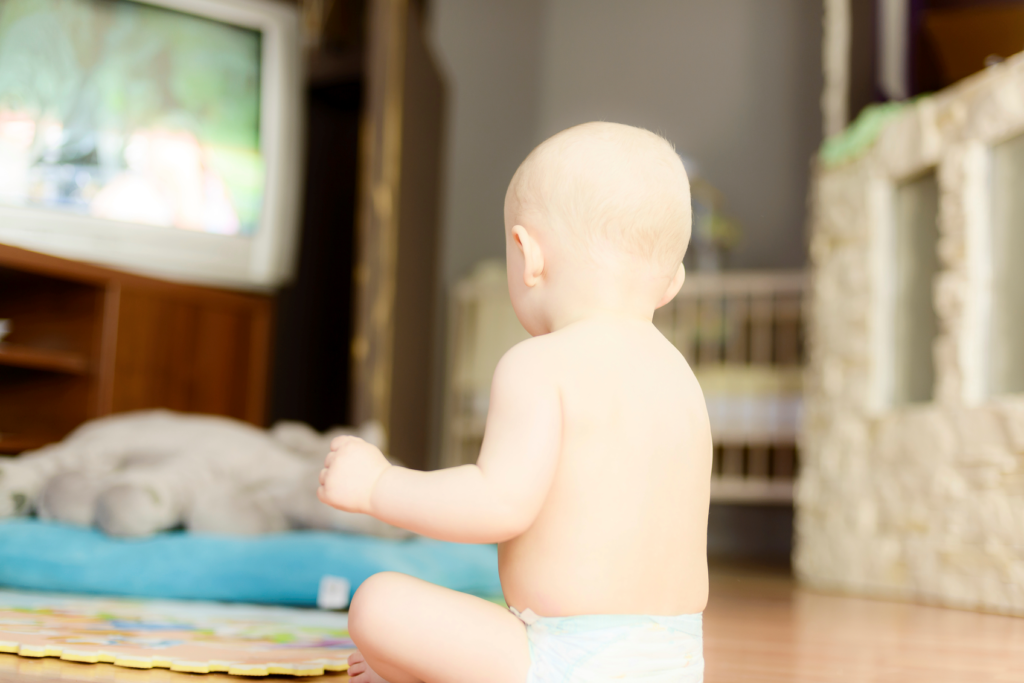 Like many new parents, we were pleasantly surprised and touched by the gifts sent to us by family and friends upon the birth of our twin daughters almost 10 years ago. But we were particularly torn by one item – a Baby Mozart videotape (remember videotapes?)

The girls’ birth came in the midst of my doctoral studies in communications and I had done a fair bit of research on children and television. Before they were born, we had planned on not letting them watch any TV at all in their early years. But now they were here, and we were exhausted and desperately seeking any distraction that might grant us enough time to grab a shower or prepare a meal.

However, the instructions that came with the video stopped me in my tracks. It explained that newborn eyes are not yet able to focus very well so I should prop up my baby two to 24 inches from the television screen to watch the show. Moreover, I was instructed to play the video several times a day, ideally at mealtimes. This contradicted everything I knew about kids and television.

My twin daughters certainly seemed enthralled by the images on the screen, but all parents know that 2-month-old babies will watch an old rerun of The Beachcombers with the same rapt attention. So while I confess to occasionally using the videos as a way to keep them occupied so I could grab a quick shower, my husband and I were always uncomfortable with the questionable quasi-scientific research that accompanied videos with titles like Baby Einstein or Brainy Baby.

It turns out my hunch was correct. The overwhelming evidence to come out of research on this subject suggests that babies and toddlers have no place in front of the screen. In fact, Dr. Susan Linn, a psychologist at Harvard Medical School, told the Chicago Tribune: “The baby video industry is a scam.”

Dr. Shirley Steinberg, associate professor of education at McGill University, suggests that adults need to consider the motivation behind the baby video industry. “Is this about the best interests of the baby or just appealing to parents?” she asks.

“Baby Einstein is about the silliest thing I’ve ever seen, these products exist so you can feel like a good mother when you turn on the TV.” But it isn’t just the false claims that these videos will turn your baby into a genius that concerns child development experts; it’s the possible damage watching too much TV may cause.

One the most worrisome studies was published in the April 2004 issue of Pediatrics. Researchers reported a strong link between the amount of television a child watches before age 3, and the likelihood of developing Attention Deficit Hyperactivity Disorder (ADHD) by the age of 7. The concern, they explained, is that watching television might literally ‘rewire’ children’s developing brains, putting them at risk for later problems with attention.

The study did not find a direct cause and effect between TV watching and ADHD. As researchers point out, children with ADHD might, for some reason, be more likely to watch TV. But the link re-opened the debate about television. Over the past few years, experts have spoken out about other problems associated with TV and kids.

For example, babies and toddlers who watch TV aren’t doing other tasks critical for their development, particularly when it comes to language. Children under the age of 3 need to spend a lot of time listening to people speak and observing facial expressions and non-verbal cues. Studies suggest that young children don’t get this from a screen — even if what they are watching is supposed to teach them to recite the ABCs or count aloud. Babies learn best from other humans, research suggests.

As well, a recent article in Scientific American emphasized the importance of unstructured, imaginative play (i.e. not in front of a TV) for the developing minds of young children. Play helps develop strong social and communication skills as well as relieving stress and developing creativity.

Despite the overwhelming evidence that television offers no observable benefits to babies, and may actually cause harm, child development experts concede warnings have little impact on a generation of parents who were themselves raised in front of the screen. A research report by the Kaiser Family Foundation found parents had tremendous enthusiasm and very little concern about letting their littlest ones watch TV.

Parents in the study reported using TV to help teach the alphabet as well as social skills like sharing when they didn’t have the time to do it themselves. It was also used to provide time for parents to cook or take a shower. They also report using screen time as a reward or, paradoxically, to help kids wind down at bedtime (despite evidence suggesting it actually winds kids up, potentially making sleep more difficult).

Dr. Steinberg suggests parents should take a moderate approach and not beat themselves up for letting kids watch some television, as long as it is kept age-appropriate and for short periods of time. “As both a mother and a grandmother, I’m thankful for media, because kids are exhausting,” she notes.

Parents who can’t imagine a world without the occasional escape of television are cautioned to use it infrequently with their babies, and to choose slow-paced child-friendly content, with a single adult entertainer. Viewing should be limited to no more than 10 minutes at a time. Ideally an adult or older sibling should talk to the baby about what is happening on the screen.

The TV is unlikely to disappear from Canadian households anytime soon but, like most things, it needs to be used in moderation.

How much TV are babies watching?
Studies suggest that roughly 40 per cent of 3-month-olds and 90 per cent of 2-year-olds watch television daily, with the average time spent in front of the TV ranging from less than an hour a day for the youngest babies to as much as 90 minutes for the toddlers. This is despite recommendations from the Canadian Pediatric Society to carefully limit the amount of television viewed by this age group. The American Pediatric Society recommends children under 2 not watch any television at all.