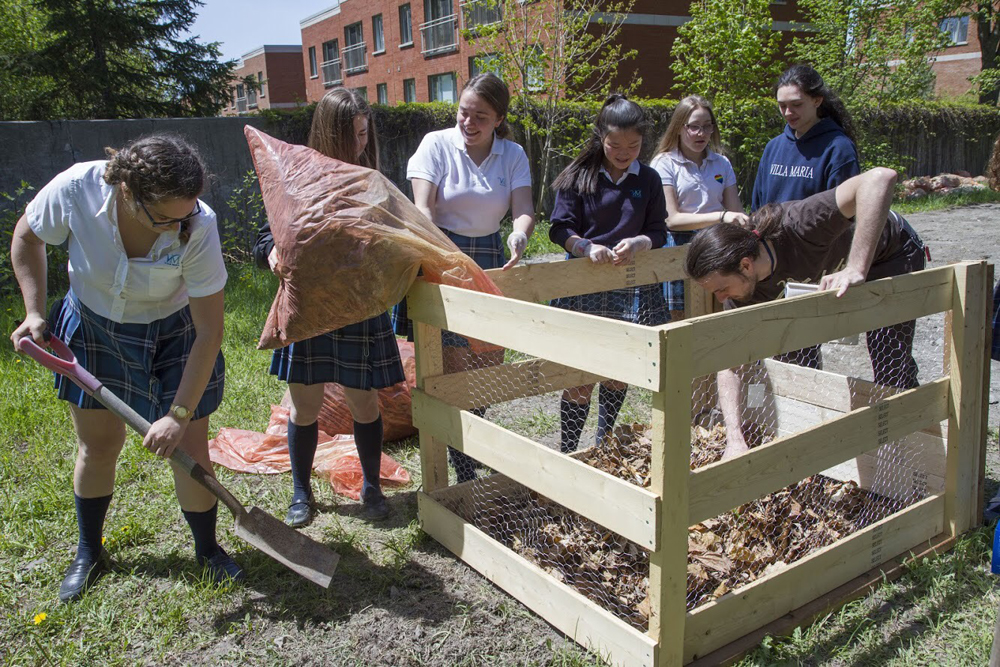 A well-tended garden is a thing of beauty but also takes a lot of work: planning, weeding, planting and feeding. Last year, Villa Maria high school implemented a new project to ensure students develop their green thumbs, while also learning about environmental science.

The Techno-Farm project is an urban agriculture and composting program built on the school’s campus, with the aim of nudging students and their parents to become more eco-responsible. As part of the initiative, the project received funding from the Ministry of Economy, Science and Innovation’s NovaScience program, which supports institutions that promote youth involved in science and technology.

Since its launch, the high school has allotted more than 2,000 square feet to the garden. Teacher André Cholmsky, who manages the project, said the environmental initiative integrates the school’s four areas of study. Growing the produce connects to the school’s science curriculum, while marketing the produce links to commerce. Students also learn about law and society through studying food-justice issues, local food, and urban agriculture.

Cholmsky says he has seen two major positive impacts on the students. For one, the program has given the students a way to  experiment with and apply what they learned in class. Secondly, the students enjoyed and benefited from working outside, even if they didn’t initially know much about gardening or composting.

All grades work on the Techno-Farm as part of their class work. For example, in Grade 7 last year, the students did a soil activity, says Cholmsky, where they would go out to the gardening sites, get some soil and bring it back to the lab for analysis.

Some have also volunteered extra time on their lunch breaks to help with maintenance work, such as weeding and watering the plants. For Sophia Dimitrakopoulos, a Grade 9 student at Villa Maria, volunteering has brought back memories of watching her mom work in her family’s backyard garden. It also made her realize how she could be making more environmentally conscious decisions, like knowing what you can and can’t compost instead of just throwing everything in the garbage.

For Alissa Couture, also in Grade 9, the program is not only an effective way to learn about composting and the environment, but also a lot of fun. “I decided to work on the Techno-Farm in my free time because it was a good way to get my mind off of school, and it’s a way to get some fresh air while applying things I’ve learned in class,” she said.

Cholmsky says the students tried planting eggplants, tomatoes, ground cherries, zucchinis, and sweet and hot peppers in their first year. But because gardening season doesn’t coincide with the school year, the goal this time around is to plant the crops that grew best from the year before.

“We had to choose the varieties of plants that require very little maintenance yet grow very well in our environment,” Cholmsky says. “So we settled on sweet peppers, 15 grapevines and strawberries.”

Crops grown last year were given to the students and their families, as well as the school’s teachers and staff.

The school has also implemented a composting aspect to the program. Students composted leftover cafeteria food as well as anything they snacked on during the day, such as apples and bananas, and disposed of them using bins within the school grounds. They have added the compost to their soil stock.

In January, the Techno-Farm won a DUX Grand Prix Award in the government institution category at a ceremony at Marché Bonsecours. The award goes to institutions that promote alternative and healthy food sources and a healthy lifestyle. This particular category recognizes non-commercial organizations like schools for their efforts.

“It’s a great honour, of course,” Cholmsky said. “It gives us confidence that we’re moving in the right direction, that there is some soundness to our goals.”

Now in its second year of development, the hope is that the school will be able to grow enough produce to donate its products to local food banks and communities.