Fall
Things to Do

The Montreal Science Centre has been hosting an exhibition on all things video games since April.

Game On, presented in collaboration with video game heavyweight company Ubisoft, tracks the history of gaming over the last four decades and takes a peek into what the future may hold. If you go on Friday or Saturday night after 5 p.m., admission is only $6. On August 20, there will be a Rock the Night event, a Guitar Hero contest displayed on an IMAX screen. On September 2, check out Women and Gaming Event, in which several prominent women from Ubisoft will talk about various jobs related to gaming, and visitors can play Just Dance on IMAX.

The exhibition will feature more than 100 games, including the retro classics Pac Man, Space Invaders and Asteroids. This interactive exhibition will also look at the different prominent brands in the gaming industry, including Nintendo and the now archaic Commodore 64. 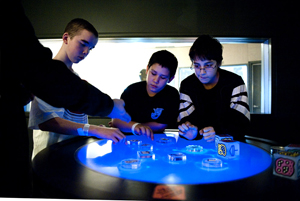 Along with some of the past’s most influential games, Game On will look at the future of this digital pastime as well as take you through a new video game called Oculus Rift where players engage in a virtual reality and use a headset to play.