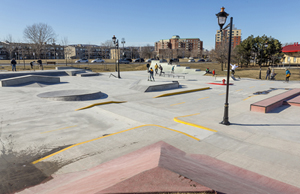 The revamped skate park in Verdun officially opened last November, but the borough is throwing its new jewel an official unveiling party on May 27. The park was closed for three months last year for an overhaul after it was deemed outmoded and unsafe.

Spearheaded by Verdun city councillor Sterling Downey and brought to life by Dan Vézina, a local skate park designer, the park is modeled after one from a 1980s video game. It stretches across 20,000 square feet (about 1860 square metres) and is made to look like a mini city; it features concrete ramps, street lamps, quarterpipes, steps, curbs and even a decorative fire hydrant. The project cost about $700,000.

The inauguration party will feature a DJ, snacks and competitions and takes place from 4 p.m. to 8 p.m. at the skate park (part of Arthur Therrien Park, 3750 Gaétan Laberge Blvd.). The skate park is open from 7 a.m. to 10 p.m. daily.