We often hear that in order to be happy in life, we should follow our passion. But when computers become a child’s passion (or obsession, as some may call it), many parents are hesitant to encourage a love of technology. In fact, a lot of time is spent trying to get kids off the computer or iPad.

But there are many positive aspects to learning about technology, and a new camp being offered in Montreal this summer will aim to teach children skills that will not only put a smile on their faces, but also potentially lay the groundwork for a future career as a movie director, cartoonist or video-game developer.

Digital Media Academy was founded at Stanford University in 2002 and now offers summer camps on more than 20 prestigious university campuses across North America. This is its third Canadian location, with camps already offered in Toronto and Vancouver. Courses are run by technology educators; professionals in their fields who use the latest versions of the world’s leading creative software, from industry giants like Apple and Adobe.

The camp will be offered over three weeks this summer at McGill University from July 6 to 24, 2015 and are geared to kids between 8 and 17 years old.

Kids between ages 8 and 12 can choose between various camps that focus on the many jobs required to develop games: programmer, game designer, architect and artist. After learning the basics of each role, students concentrate on one or two roles while working together as a development team. 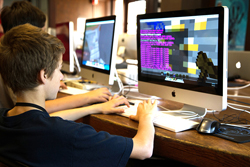 There is a more advanced Minecraft game design offered for those between 12 and 17 years old. The programmer develops interactive maps, the game designer focuses on the story and how the game works and modifies game elements. The architect focuses on design, using Minecraft’s block-building system to create levels. Finally, the artist creates pixel art for items and textures, using graphics software like Adobe Photoshop.

There are also sessions that focus on animation, game design, filmmaking and special effects.

“We believe in a different kind of screen time; we want kids who play video games to be video-game creators,” said Vince Matthews, director of public relations for Digital Media Academy. “Our camp is open to any kid who has an interest in creating something cool with technology. And also for kids who believe they could be the next Steve Jobs or Steven Spielberg. We are teaching skills applicable to education and a future career.”

Matthews says some of the campers have gone on to get internships at Google, created their own apps and even started their own companies.

Apart from learning about technology, Matthews says there will also be plenty of outdoor activities.

“We don’t want the kids to be spending the day indoors so we include sporting activities such as teambuilding games, water gun fights and other outdoor activities,” he said.