Melanie Green says she doesn’t remember much about the first few days of her daughter Angelina’s life. “I was 19 years old and had a pretty traumatic experience; the whole thing was a big blur,” said Green, who had to have an emergency caesarean when the baby’s heart rate began to drop. “For days after, I was on morphine to help me heal so I have really vague memories.”

She vowed things would be different the next time so, when she became pregnant in 2012, a colleague suggested she speak to someone at the Pointe Claire Birthing Centre rather than going the traditional route with a gynecologist.

Green called but she didn’t hear back for almost two months (there is a really long waiting list). But at 33 weeks, she was told there was an opening for her.  “It was the happiest moment ever,” said Green, who was given a tour of the centre then introduced to her midwife. “It just felt right – like this is what I’m supposed to be doing.” 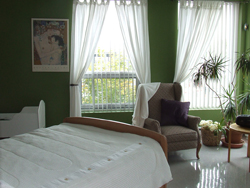 The Pointe Claire Birthing Centre is located above the CLSC in Pointe Claire. It’s equipped with several prenatal offices and a separate wing with private birthing rooms, which feature a double bed, a bathroom with a tub and shower, and access to medical equipment. The centre also has a room with a birthing tub for water births. In addition, the centre offers families access to a kitchen and lounge.

Green said her midwife asked a lot of questions and told her it would be fine for her to have a vaginal birth because it had been 10 years since her caesarean and the scar had completely healed.

“My midwife even called the hospital and found out what kind of incision was made and how they stitched it up,” Green said. “She told me more stuff about my caesarean than I ever knew because she got all the documents from Lakeshore General Hospital.”

Midwives submit their clients to thorough prenatal examinations to ensure that they can provide pregnant women with optimal care, according to Catherine Mason, a midwife at the Pointe Claire Birthing Centre. The midwifery option for childbirth is covered by medicare and midwives must be registered with the provincial health services regulatory body.

“Our college has strict guidelines about the care we provide,” Mason added. For instance, if the patient had type 1 or type 2 diabetes before she was pregnant, she can’t be treated by a midwife but she can if it’s gestational diabetes (which can develop with pregnancy) that can be controlled with diet. 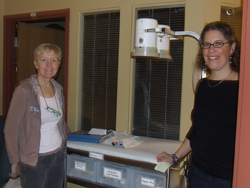 The birthing centre carries the same natal equipment as hospitals and midwives receive emergency medical training as part of a four-year bachelor’s degree in health sciences. These professionals are trained to handle complications that might occur during labour, such as uterine hemorrhaging and nuchal cords (when the umbilical cord is wrapped completely around the baby’s neck).

However, if a woman has prenatal complications that might make for a high-risk pregnancy, midwives are required by the provincial regulatory authority to transfer primary care to an obstetrician.

But despite this, there are still many people who have reservations about the profession; some believe midwives aren’t properly trained. Initially, even Green’s family members weren’t convinced this was the right route to take.

In fact, she was getting so much pressure about her decision that her midwife suggested Green bring her mom to their next meeting. “She told my mom that midwives have been doing this for a long time and the risks I face are very small; she made my mom feel much better.”

In the early hours of December 14, 2012, Green went into labour. At the birthing centre, the midwife suggested several positions to help with the pain and told her to walk around with her husband while she got a bath ready. Green did spend some time in the tub, trying to relax.

“The pain was crazy,” Green recalled. “But she would just remind me that the baby’s working and I’m working, and as long as we keep working together, it’s going to be over soon.”

Green said her husband played a supporting and integral role in the birthing process, and the couple was together throughout the length of her labour. “I couldn’t have done it without him, and maybe he doesn’t realize that,” Green said. “He was behind me holding my hands for five hours because that was my favourite position. I don’t know how he did it, holding me as I was screaming and sweating.”

Six hours later, weighing in at 9 pounds, they welcomed A.J. into the world. “He breastfed right away and then we just lay in bed for the rest of the night and went home the next day. It felt like I was (giving birth) at home, but I had that extra security of having the equipment and expertise there in case something did go wrong.”