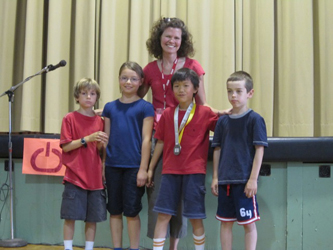 A plate of pretzels (the straight ones) is placed in front of a few Grade 3 math club participants. “Don’t eat them!” I warn. The kids are excited and intrigued; I’m using pretzels to teach them about triangles. Three of the same length makes an equilateral triangle. Take a bite out of one, and make a new triangle. Now it is an isosceles. Eat those and start again. Scalene, right-angles, vertices, sides: the learning continues until the pretzels have all been eaten.

So just how did pretzels come to be in a classroom at Edinburgh School in Montreal West? In the fall of 2008, the governing board created an enrichment committee to develop new learning opportunities for students. As the parent of a then Grade 3 student, I volunteered. We discussed a variety of options, one of which was possibly participating in a Canada-wide math contest.

I mulled this idea over the next several days and researched math contests online. In the end, we decided to go ahead — but we wanted to teach math in a way that was fun, non-threatening and relevant to all students, not just a select few smart kids who would compete. As an engineering graduate and lifelong math lover, I was excited to take on this project.

The first session was for Grade 3 students, lasted eight weeks and was held at lunchtime. The governing board and the principal were very supportive, providing a room and, later, funding for supplies and contest registration fees. More than 30 students joined and suddenly I was forced to create a second group and asked for other parent volunteers to occasionally help out.

Math clubs exist in many schools, though they are less common at the elementary level. I got most of my ideas about how to make it enjoyable by searching online with keywords such as “math fun”, or “math games” and then for specific topics like “probabilities” or “sequences. 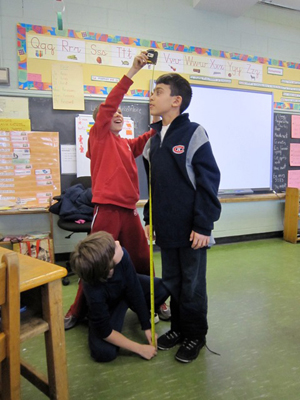 This is my fifth year leading the math club (now called “Math-a-maniacs” after a student vote). It has grown to include students in Grades 3 to 6 and between 40 to 50 students take part each year. The Grade 3 group is always the largest; I think many parents are keen for their children to give it a try. In the higher grades, the kids participate more by their own choice. Some are strong math students, but many come because they are intrigued by the games and activities.

The fall session is all about fun with math. We built Platonic solids with gumdrops and toothpicks, explored ratios and averages by measuring each other and learned how to calculate cost per square inch by measuring pizzas!

During the winter session, we prepare for the national Mathematica Centrum contest in April. This organization offers contests at each grade level across the country, with more than 40,000 students participating. The multiple-choice format is new for most students and requires a careful reading of the questions as well as math knowledge. We spend a lot of time on vocabulary and basic test-taking strategies.

I have had many rewarding experiences as “the math lady” at Edinburgh. One of our members, Taisei Fu, has twice been the Quebec champion in the Mathematica Centrum contest. This year, a young Grade 3 student who struggles with many concepts is making great strides because of a lot of enthusiasm and a positive attitude.

Reaction from the parents has been positive, too. One parent recently said about his son: “After a bit of trepidation and nervousness, Matthew came to enjoy working on the math problems, and found self-satisfaction in seeing he could figure them out on his own, which was really nice to see,” said parent René Bruemmer. “We appreciate your work, and that you taught him math can be fun, which is a great gift.”

How to start an enrichment club

www.mathsisfun.com/index.htm
I’ve used this more for my own preparation and to generate ideas.

http://oswego.org/ocsd-web/games/mathmagician/maths1.html
For drills (we don’t do these in math club, but still a good idea!)

www.bigbrainz.com/index.php
Learn multiplication facts by playing a video game (I have only used the free version).

www.kokogiak.com/megapenny/default.asp
It shows how big a million is.