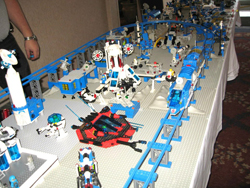 Since its inception in 2007, the Montreal ToyCon has been delighting toy and comic book collectors with its regular exhibition of specialized dealers and devotee exhibitors.

The event caters mainly to avid toy collectors and will feature creations from the QueLug Lego Club, and appearances by the Montreal Ghostbusters Club and the Canadian Garrison of the 501st Legion, a troupe of Star Wars devotee.

Comic book dealers will also be holding court at the ToyCon but you can expect them to be less visible than at ComicCon as the convention emphasizes the sale and display of toys. But comic book fans need not despair as many of the vendors specialize in toys featuring action heroes from comic books, science fiction and fantasy.

The convention is family-friendly and is held several times a year. The fall ToyCon will be held on Nov. 16 from 10 a.m. to 5 p.m. at Courtyard by Marriott, 7000 Place Robert-Joncas.

Admission is free for children under 5 and $5 for everyone else.