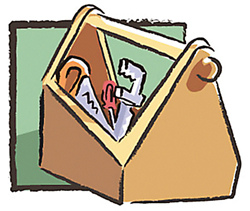 Many of us spend a lot of our time trying to eliminate stress from our lives; we take deep breaths, do yoga or Pilates, chase away negative thoughts and use other coping mechanisms to get through the day. But maybe this wouldn’t be such an effort if we had been taught these strategies as kids. By the time we reached adulthood, we would have had years of practice.

A program being implemented at Willingdon School in N.D.G. aims to do just that – and more. The Toolbox Project, which hails from California, outlines a set of 12 “tools” children learn to help them deal with challenging situations that can arise in their daily lives.

There are traditional ones parents teach kids, such as saying “please” and “thank you” and how to be patient, but others, including “empathy” or “breathing” tools, may not always be imparted to youngsters. The project aims to make kids more self-aware and resilient, and to think about the implications of their actions.

Willingdon is the first school in Canada to incorporate the program into its curriculum. The program was piloted last year by three teachers, in six classes of students in Grades 3 through 6, and it’s being taught school-wide this year. It is also being implemented by staff from the Extended Day Program and lunch monitors, so the kids are learning in and outside of the classroom.

Dr. Krista Lawlor, whose daughter attends Willingdon, came across the program in her research as a medical educator and palliative care doctor. Lawlor was looking for a program that could promote self-awareness and empathy.

Around the same time, the Quebec government introduced Bill 56, which ordered schools to implement anti-bullying programs. A team from Willingdon, made up of parents, teachers and administrators was formed to look into various possibilities.

Lawlor suggested The Toolbox Project, which aims to provide children with a full set of socio-emotional skills to use in their lives. She said that having kids practice and develop those skills in school, where they spend much of their time, helps ensure everyone is on the same page.

The team was keen on the idea and Lawlor went to California to learn the tenets of the program. Every second Friday during the pilot project, she and two other parents taught the children the various tools alongside their teachers.

Lawlor said she was amazed how quickly the kids were able to put them to use at school and at home. “Several children talked about being able to use their breathing tool and go to their ‘quiet safe place’ rather than get into a fight with a sibling at home or with a friend in the schoolyard,” she said. “Others began to ask for their personal space to be respected when in line rather than yell or push another student.”

When there is conflict at school, students are asked which tools might empower them and help resolve the dispute.

Before this school year, members of the Dovetail Learning team, which developed the project, came to Montreal for a training seminar with the teachers, administrators and other staff at the school.

Isabelle Daniel teaches a class of fifth graders who were part of the pilot project last year. She said she has already noticed some changes with the students. For example, one student would hold a door for another, and the latter student would say “thank you”. Not a groundbreaking interaction, she conceded, but it was fairly uncommon before.

Her students say they use the tools when dealing with pesky younger siblings (“and not resorting to violence,” said one boy), handling disappointment with their sports teams or when they just need a minute to themselves.

Daniel said she finds ways to incorporate the tools into their class time, from having students draw pictures or write journal entries about times they’ve used the tools to having them take a deep breath before tackling challenging math problems.

And, she says, she also tries to model the behaviour herself. In turn, the students say they wind up teaching others – friends, siblings, even parents and other family members – about the tools through their own actions.

Lawlor said the hope is that the ethos of this project will become part of the school’s culture. “We should be helping children develop these skills from a very young age.”

For more information about the project, visit dovetaillearning.org

Breathing, which encourages a child to take a breath to calm down before acting;

Quiet/safe place, a real or imaginary place a student can go for a minute of solitude if they need it;

Listening, which instructs them to listen “with their ears, eyes and heart” when others speak;

Empathy, which helps a child understand how their actions affect others;

Personal space, which teaches them they have a right to their space;

Use our words, which explains the importance of speaking up and choosing their words carefully;

Garbage can, which teaches a child not to sweat the small stuff;

Taking time, which encourages them to remove themselves from a situation and to take time and reflect;

Please and thank you, which teaches them respect and how to value others;

Apology and forgiveness, which helps them to admit mistakes and forgive others;

Patience, which helps them accept there are things they can’t control;

Courage, which helps them stand up for themselves, their beliefs, and for their peers.