Titus Mountain is a gem for family skiing

Our first family ski weekend began with two of my three kids in tears. They weren’t just disinterested. They did not want to go. My middle daughter begged me to find some way for her to stay home.

This was not at all what I expected.

After some time in teary negotiations (theirs — and very nearly mine as well), I learned my daughters were scared: they feared going too fast, falling down, getting lost, and, especially, riding the chairlift.

No reasonable response made a difference. It didn’t matter that they would begin with a lesson and start on the bunny hill. I promised them no one would make them ride the chairlift before they were ready.

We settled on a compromise: they would try it out but could stop when they chose to. They would do the lesson, and if they didn’t want to ski after, we wouldn’t insist. As with many compromises, this made none of us happy, but it did stop the waterworks.

We were heading to Titus Mountain in Malone, New York, an easy hour-and-a-half drive from our home. Titus was named the most family-friendly mountain in the north-east last year by Liftopia, an online skiing blog. I reminded myself not to panic: if anyone can figure out how to get two stubborn little girls to give skiing a try, it would be the instructors at this mountain.

As it turned out, my hunch was right. We had taken my older son skiing before, at Mont Rigaud southwest of Montreal and at Le Massif north of Quebec City, and although we enjoyed both mountains, the folks at Titus have the family experience down to an art.

The menu at the chalet was clearly geared for family budgets and children’s preferences. When we ordered hot chocolate, a cup of ice even arrived unasked for, in case little tongues found the drink too hot.

Prices are among the most affordable in the region too, at $21 for the learning hill and ranging from $29-$49 for a daily lift ticket (and if you book in advance online, you get a discount of up to 40 per cent off). The cost is comparable to smaller local mountains like Rigaud, but the Titus resort has three mountains with more than 50 runs and 10 chair lifts, compared to Rigaud’s 13 runs and one chair lift. 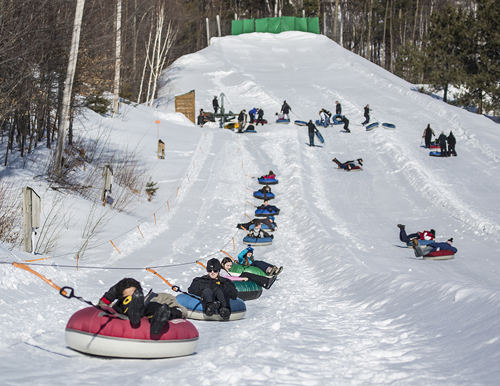 The bunny hill was bigger than I expected, and includes both a “magic carpet” for little kids and first-time skiers or snowboarders and a small chair lift that never feels like it goes too fast or too high for little kids. The mountain also has a two-lane tubing hill with a rope to tow you back up after each slide.

When we showed up for our lessons, the instructors somehow managed to connect instantly with even the most nervous of my kids, and all three shuffled off to the magic carpet without further complaint.

During their lesson, I skied off with my own instructor, who gently helped me remember all the ski techniques I learned when I was a teenager. By the end of our one-hour lesson, I had braved a black diamond run — something I had been sure I would not dare try.

Although my 4-year-old declared herself ready for hot chocolate after her lesson, she left the hill with a smile on her face. She said she had fun and would like to go again.

It didn’t surprise me that my 10-year-old son wanted to keep skiing, but my 8-year-old who had been so scared to ski before we left home ended up being the last one to leave the hill. She drummed up the courage to try the bunny hill’s chairlift, and shortly figured out she could zip down ahead of me and hop back on the lift, ignoring my shouts to join us for dinner.

In the end, I actually had to grab her arm to stop her skiing off for another “last” run. In return, she insisted I promise I’d bring her back one day. It was one compromise I didn’t mind at all.