Home / December 2013 / Tips for getting teens to talk about school 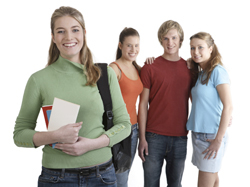 A few weeks ago, one of my 14-year-old twin daughters came home from school and I immediately enquired about the big test she had written that day.

Me:  How did it go?
Daughter:  Fine.
Me:  Did you know the material?
Daughter:  I guess.
[End of conversation]

I couldn’t help but think of the breathless chatter with which they used to narrate their lives for me. I would greet them after school and they would fall over themselves trying to beat the other in describing what their classmates wore, what they had for lunch, who got sent to the principal’s office, or who mixed up their Ds and Bs on a spelling test. At night, it was a struggle to get them to stop talking and go to sleep.

Then they turned 12 and the singsong chatter faded, which is entirely normal and age-appropriate. The drawing of boundaries is a healthy development for most kids. Distinguishing themselves from their parents and building their own identities is part of the serious work of adolescence.

It’s a hard phase for a parent, nonetheless. Just as their children begin this retreat, the issues they may face at school and in the rest of their lives get more serious. While I loved hearing my daughters’ little-kid thoughts, I need to know about their teenage concerns. I want them to be able to keep talking to me.

It turns out that keeping the lines of communication open through high school isn’t impossible: it just requires a different approach than you might have used in their elementary-school years, and a bit of finesse. Here are some strategies worth trying:

Be quiet and listen. This key tactic can be the hardest for some parents. When your kid starts talking, resist any temptation to teach, lecture, criticize or solve his problems. Unless he directly asks for advice, what he wants most of all is your genuine interest and loving acceptance.

Avoid direct questions. Your tween or teen will automatically shut down in the face of direct questioning. Even something as innocent as “how was your day?” may be met with suspicion or dismissal (like my question about my daughter’s test). Find a reason to offer a positive observation or a compliment. Maybe you’ve read the novel she’ll be studying, or you remember a story from when you had to study Canadian history. You can also always ask her to help you figure out the email settings on your smartphone (or something tech-related), or her opinion on something in the news.

Avoid eye contact. Tweens and teens (especially boys) can feel challenged when parents or authority figures make direct eye contact, and so can be difficult to draw out. Some of my best conversations with my mom when I was in high school occurred when we cleaned up the kitchen after dinner. Driving anywhere in the car is also great for conversations or for tackling difficult issues.

Ask them about things other than school – like their music. Even if it sounds like someone is torturing the cat. Remember what you loved as a teen and how it made you feel understood? (Was it Duran Duran? Air Supply? Bon Jovi? English Beat? The Beastie Boys?) Music speaks to teens on precisely the emotional level we parents are so desperate to access. Ask your son or daughter to play his favourite song or share his favourite lyrics. Be very careful not to show the slightest bit of contempt or criticism or you will lose all credibility. It’s okay if you don’t like it, but show interest.

Keep it casual. Your kids dread the idea of a big formal “talk” about a serious topic (getting better grades, drugs, sex, alcohol, Facebook, etc.) as much as you do. And they automatically shut down when they hear a lecture coming. Effective communication about these issues will happen in small increments over many years. Instead of a series of serious sit-downs, try to communicate your values, attitudes and rules in more casual conversations over time. 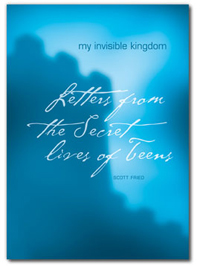 Lie next to them at bedtime. The fabulous Scott Fried, author of My Invisible Kingdom: Letters from the Secret Lives of Teens, talks about how we all give up our secrets in the dark (which also explains the intimacy draw of teen sex). Once upon a time you laid next to your child at bedtime and read her stories. When did that stop? Your 14-year-old son and 16-year-old daughter are not too old for you to lay down next to them once in a while. Enjoy their closeness for a few minutes. Don’t say anything. Let the silence draw them out.

Remember that “talk” comes in many forms. I recently watched one of our teens and my husband (a man of few words) sit together on our dock at the lake and play with a remote control boat. The conversation went something like this:

Daughter: Wow, it’s fast!
Dad: Yup. Pretty cool. See if you can send it all the way to the rocks.
[silence]
[occasional laughter and hoots of pleasure]
Dad: How’s school going?
Daughter: It’s good.
[daughter rests her head on her dad’s shoulder]

That’s it. Totally awesome. I realized I could learn something from that, given my usual tendency for constant commentary.

I have discovered that communicating with teens requires regularly sharing quiet company, keeping it casual, and — especially — listening rather than talking.