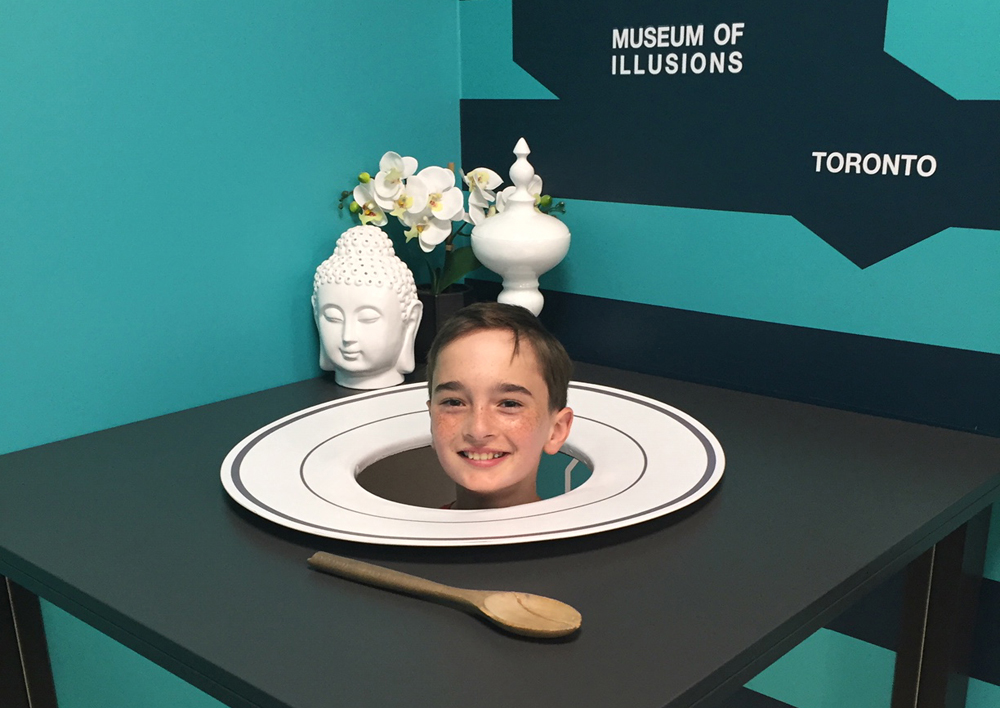 Most kids can’t wait until they are taller than their parents. This “reality” can happen sooner than expected if you take them to the Museum of Illusions in Toronto. In the Ames exhibit, two people stand at opposite ends of the room: one looks like a giant and the other looks like a really small person. It looks like an ordinary room when you walk in but some type of distortion creates a visual illusion. Get someone to snap a picture and your child will have proof that they are taller than you!

Opened over a year ago, this attraction is part of a global franchise of museums, with 14 locations worldwide. The downtown Toronto location on Front St. is the first one in Canada with two more in the works for Vancouver and one in Montreal. The inaugural museum was opened in Zagreb, Croatia in 2015.

A place where nothing is as it seems, the museum is entertaining because of its many interactive exhibits. With more than 80 illusions, holograms, and installations, visitors will be hard-pressed not to find something that either amazes or thrills.

When you enter the museum to purchase tickets, there is an area with various educational games and puzzles that kids can’t help but gravitate towards. These include brain teasers, building blocks, impossible knots and mathematical games. Alas, I failed at making a pyramid out of 20 wooden balls.

My 14-year-old son Max and I tested our sense of balance going through the Vortex tunnel, a rotating cylinder that makes you feel like the stable ground beneath you is shifting under your feet. Not for the faint of heart: I felt a little dizzy and was happy to reach the other end. Max had gone before me and giggled as he watched my dazed expression as I meandered through, a little unsure of myself.

The Rotated Room, with furniture and accessories attached to the ceiling, makes everything appear upside down. This makes for great photos as everyone appears stuck to the ceiling (which is actually the floor).

Head on a Platter was another top find for us, with the illusion making it appear as if Max didn’t have a body. At another installation, Max sat down at a large round table, seemingly by himself. With an illusion involving a chandelier and mirrors hung at strange angles — poof! — Max was suddenly multiplied by six.

Parents who love attractions that entertain while having an educational component will be happy they popped into this museum. It’s definitely a place where kids can learn about visual deceptions as well as why their eyes see things their brains cannot process.