The face of autism

Wendy Zaritsky took her daughter Alex to the pediatrician at 12 months because of her lack of verbal skills and ‘a gut feeling something wasn’t right.’ The doctor sent her for a hearing test because any degree of auditory loss can hamper a child’s ability to communicate.

After the test at the Montreal Children’s Hospital, the parents were asked a few disturbing questions that related to symptoms of autism. Does Alex flap her arms? No. Does she bang her head against walls? No. Does she have odd eating habits like eating sand at the park or ingesting other inedible things? No.

“At that point, I was even more nervous and was hoping that Alex was deaf because it would be a lot easier to learn sign language than to raise a child with autism,” Zaritsky said.

The pediatrician suggested Alex be tested for autism and she was put on a waiting list in July of 2006 (it can take up to a year or more to get a diagnosis). Six months later, Zaritsky got a call asking if she would like Alex be part of a study, which meant she would be tested in near future.

Zaritsky said the doctor took little time to reach a conclusion. “He blew bubbles and watched to see if she looked his way. He remarked about her poor eye contact and lack of verbal skills then he turned to us and said ‘I don’t have to go any further, she has autism.’”

Zaritsky said she started crying and her husband took her in his arms. “I was anxious, scared and kept thinking ‘where do we go from here?’ ‘how are we going to help her?’ and ‘did I do something to cause this?’”

At the time, Zaritsky was eight months pregnant with their second child. “I couldn’t help but worry that the baby I was going to deliver in one month would also have autism,” she said. (The family welcomed a healthy baby boy, Max, who is not on the spectrum.) 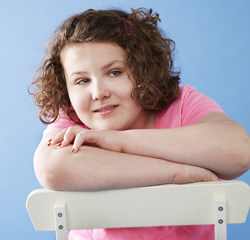 With April 2 being World Autism Day, Zaritsky says she wants to share her story with other families and pass on what she has learned. “We felt that we were dropped into a system that left us up the creek without a paddle. I want a brighter future for families who find themselves in a similar situation,” she said. “Most importantly, parents should go with their gut; if they suspect that something just isn’t quite right, they should get informed.”

Treatment is expensive and waiting lists for publicly funded therapy are long. The government funds treatment from 3 1/2 to age 6 but early intervention is key with autism so parents often borrow money or dip into savings to get private treatment. Also, kids are put on a waiting list at 3 1/2 but it could take up to a year or longer before they receive treatment.

For the first year after diagnosis at age 2, Zaritsky spent $360 a week on an educator and $260 a month for a treatment supervisor, which cost approximately $22,000. “I called the rehab centre that is publicly funded when Alex was 3 1/2 and told them if they didn’t put her on the waiting list soon, I would be homeless,” she said.

Zaritsky added that her husband had to work two part-time jobs for awhile in addition to his full-time occupation to get Alex the best possible private treatment.  “The government should realize those long waiting lists are forcing families into situations that put a big financial and emotional strain on family life.”

The Canada Revenue Agency offers a tax-free Child Disability Benefit for families who care for a disabled child (under the age of 18). In order to be eligible, an accredited professional must diagnose your child and fill out an application form. More information is available at cra-arc.gc.ca. Once you receive a diagnosis, you can retroactively receive funding from the federal government going back to birth.

Zaritsky says they also discovered a great program through the Quebec government where you can apply for an electronic device (up to $2,000). “I encourage parents to inquire about eligibility,” she said. “We received a great computer that has helped Alex a lot.” http://bit.ly/1Hro4zH

The family received $9,000 from this foundation. It accepts applications from families whose children have been diagnosed with a range of disabilities, including cerebral palsy, autism, muscular dystrophy, spina bifida and various developmental delays. To be eligible, applicants must have a household annual income of $70,000 or less and be a Canadian citizen or permanent resident. To apply, go to: http://bit.ly/1EJmYiw

Facebook page Mtl Parents of kids with special needs acts as a support group for parents of children with special needs, including behavioural, intellectual and other health-related issues. The group has more than 160 members; in order to protect their privacy, the group is searchable on Facebook but nothing that is posted is visible to the public. http://on.fb.me/1GLUsNp

Kéroul is a non-profit organization that promotes and develops accessible tourism and culture across Canada and worldwide. Its website has a wealth of information on travelling with someone who has a disability, including a list of travel agents who have been trained to help plan hassle-free vacations. It also has details on discounted rates for caregivers while travelling. http://bit.ly/1bov72m

If you are looking for autism resources around Montreal, visit click here for our Resource Directory listings of organizations, camps, schools, courses & programs and respite services for families with kids on the autism spectrum.