The dangers of E-cigarettes

Smoking kills. For decades, that message has been broadcast to young Canadians via billboards, graphic warning labels, education programs, and other media campaigns. And young people seemed to be listening: rates of cigarette smoking among 15- to 19-year-old Canadians dropped consistently over the years from a high of 29 per cent in 1996-97 to 11 per cent in 2012.

But the message may be undercut by the recent arrival of e-cigarettes, slim cylinders that electronically vaporize a solution of water and other ingredients, creating a mist to be inhaled and exhaled, just like old-fashioned cigarette smoke.

Fans of e-cigarettes say the vapour is harmless, unlike the smoke created from the burning of tobacco in regular cigarettes. Yet parents should be wary of claims about the safety of e-cigarettes and be willing to talk with their children about the attraction and the risks associated with “vaping” as it is sometimes called.

The Canadian Lung Association has stated that it considers these devices to be “potentially harmful to lung health,” noting that users may be inhaling unknown and possibly harmful substances from the cigarette’s vapour. According to the association, e-cigarettes may contain ingredients toxic to humans, including known carcinogens (cancer-causing agents).

Also worrisome is the fact that e-cigarettes can contain nicotine, which is a powerful, highly addictive drug. According to the Canadian Lung Association, nicotine triggers the release of a brain chemical called dopamine, which boosts people’s moods and makes them feel both calmer and more alert. However, as the nicotine effect wears off, people tend to crave the good feeling, thus potentially starting them on a cycle of addiction. In fact, nicotine addiction is a notoriously difficult habit to break and can be a lifelong burden.

The Mayo Clinic website states that “when the US Food and Drug Administration (FDA) analyzed samples of two popular brands (of e-cigarettes), they found variable amounts of nicotine and traces of toxic chemicals, including known cancer-causing substances (carcinogens). This prompted the FDA to issue a warning about potential health risks associated with electronic cigarettes.”

There is also the issue of how e-cigarettes glamourize smoking, especially when young people see movie stars and other well-known media figures puffing away. Health experts also worry that this trend may normalize smoking, making what once was considered a dirty habit to be taken outdoors onto cold street corners into something perfectly fine to do anywhere. The Canadian Lung Association notes that such normalization may undo decades of public health education, tempting young people to take up smoking regular cigarettes.

Finally, research indicates that addiction to one substance may open the door to other addictions. This is called co-morbidity, and it explains why smokers are more likely to also develop problems with alcohol, gambling or illegal drug use. Decades of scientific study show that kids who smoke are more likely to have issues with mental illness, depression and anxiety. While health experts can’t say that smoking causes those problems, research shows that risk taking on one front (such as developing an addiction to nicotine) means teens may be vulnerable to other kinds of high-risk activities.

The arrival of e-cigarettes, and their portrayal as being “safe,” should have parents on guard. We need to continue to talk about the real risks and harm of smoking any kind of cigarette. 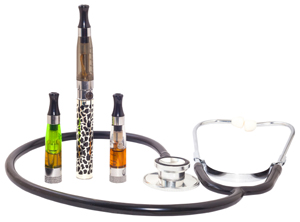 Don’t use these devices in front of your children, because this models it as acceptable behaviour. Research shows that kids whose parents smoke are much more likely to try smoking themselves.

Explain how e-cigarettes and nicotine are harmful to their health.

For evidence-based information on the dangers of smoking, visit the Canadian Lung Association.