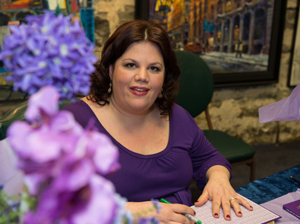 Amy Fish figures the starting point for her new book, The Art of Complaining Effectively, happened at a submarine sandwich shop in 1996.

“Does that lettuce look a little brown to you?” she asked the sandwich maker, who glanced down at the shredded iceberg and replaced it with a fresher batch.

Bingo. Not only did she get a turkey sub with crisper, greener fillings, the customers behind her also benefited from her willingness to speak up.

Fish, a Montreal mother of three, spent another 17 years honing her skills in handling complaints first as an ombudsperson and now as the Director of Quality and Operations at Jewish Eldercare and Maimonides. “I realized that you have to be available to people one at a time,” she explained. “You have to learn to listen.”

She started offering workshops on handling complaints and then started to blog about complaining and how it played out in her life at www.complaintdepartmentblog.blogspot.com. She soon garnered a strong following of fans who enjoyed her funny, candid and sometimes irreverent approach. The book was a logical next step. 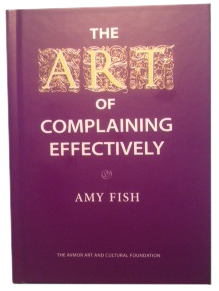 In the book, Fish lays out practical advice in chapters with titles like “Calm” and “Concede” using lots of real-life examples, often focusing on family life. She recalls how she lost her cool with an officious librarian who wouldn’t let her small children take out books because of paperwork. And she tells a story about a mom frustrated by lifeguards texting each other instead of supervising the kids in the pool.

In fact, Fish has plenty of advice specifically for parents. First, teach your kids to speak up for themselves instead of rushing in to speak for them.

“It starts at a young age,” she says. “If you are at a restaurant and they need a fork or spill their water, it’s your responsibility to get them to speak politely for themselves.”

She suggests starting with the less stressful situations. “If a child says ‘I’m thirsty.’ You say ‘And?’ Teach them to resolve it. Or ask them to ask for a drink. So by the time they get to school (and you aren’t around), they are ready to stand up for themselves.”

Fish often gets questions from parents about handling conflicts and complaints at school. She says kids need to know how to stand up for themselves.

“A kid who approaches a teacher very calmly, is willing to compromise, and knows what they want when they go to talk to her or him is more likely to get a satisfying outcome,” she says.

Fish tells a story about one of her sons who got the role of an elf at his school’s winter concert. Another student was disappointed because she wanted the role, too.

“So together they went to the teacher and asked, ‘Can we split the role – can we have two roles?’ And he said sure. They went at recess, so they picked their time. They were respectful. And they knew what they wanted, and they asked for it.”

Fish also suggests that people gather up all the information they need before making a complaint. Your child complains about a mark? Get the backstory: did they understand the material? Attend all the classes? Pay attention? Study properly?

“They need to be prepared. They need to go in to the teacher with the graded paper or exam and politely say, ‘I want to do better. Can you help me figure it out?’ ”

She acknowledges that we need to know when to pick our battles, especially where our kids are involved. And some parents don’t speak up because they don’t want to be THAT parent, the one who makes a lot of noise.

“That’s the point,” Fish says. “When you are complaining effectively, you aren’t making noise. You are making compromises, you aren’t just screaming at people or saying my kid is an angel. You are very, very specific.”

If you find yourself still dissatisfied, Fish advises you consider very carefully what you may be jeopardizing in a relationship before taking it to the next level.

“I don’t complain very often at schools because it’s about building relationships. It’s not just about the mark. It’s about thinking about where you want to be.”

Fish will be signing books from 5p.m. to 7:30pm at Hampstead Day, in Hampstead Park on June 12.