As those lazy summer days dwindle away and the back-to-school countdown begins, it can be difficult to get kids back into a scholarly frame of mind. Help them reawaken their minds by slipping a few books onto their nightstand. Consider books that tell stories through illustrations, which help kids ease back into reading without overtaxing the brain. Many of these books are clever, complex and thought-provoking, with the images encouraging an active participation in the story. In fact, kids might be so easily absorbed by the accessibility of these books, they won’t even realize that their holidays are drawing to a close.

Author and illustrator Shaun Tan recounts the haunting and jarring experience of being an immigrant. Although the author does not focus on one particular culture, his attention is drawn towards those who must flee their country due to war or persecution. His main character leaves a world that is up in flames, being suffocated by the tentacles of some vague monster. He must say goodbye to those he loves knowing he may never see them again. He then travels across the ocean on a crowded boat, arriving in a fictionalized New York City. 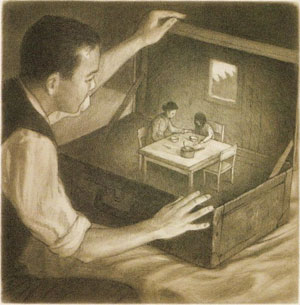 One of the interesting aspects of Tan’s book is that he doesn’t glorify the new world, which happens all too frequently in immigrant stories. He never diminishes the struggles and challenges of arriving in a new place, where you don’t understand the language, the customs, the technology or the codes of behaviour. In Tan’s book, the main character encounters what looks like a little monster in his new environment. It could be a dog or a cat for that matter, but it’s odd shape signifies the strange feeling of being surrounded by so much that is new and unknown. His charcoal drawings give the book a fantastical mood that emphasizes the surrealness of the experience.

North Korea is the most isolated country in the world. Its population is completely forbidden from interacting with foreigners or anything foreign, for that matter. Sheltered and restrictive, the country is practically inaccessible to the outside world, but French Canadian animator Guy Delisle crossed the border into the country when he was hired to complete a contract there. 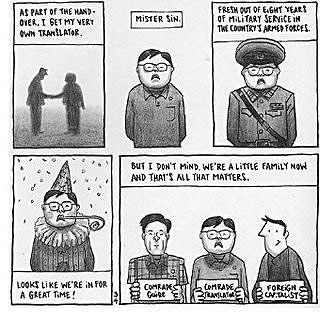 Through his graphic novel, Delisle shares the experience of being in a communist country where the government controls every aspect of life. He is assigned a guide, a translator and a guard to ensure that he never wanders too far unmonitored. From being given a tour of Pyongyang’s luxurious subway station to odd rituals such as walking backwards for exercise, Delisle gives exclusive insight into the country. What he best captures, however, is the endless bombardment of propaganda on a population that has no way of knowing what happens in other parts of the world. They are convinced of their leader’s righteousness and importance on the world stage, based on information designed, constructed and fabricated solely by the government. Their ignorance reinforces their willingness to comply.

Readers will quickly come to appreciate the freedoms that surround them, and might even start to look forward to going back to school and learning more about the world.

This creative graphic novel brings to life the story of White Rapids, a town built near Shawinigan to house workers from a local power plant. The town is practically built from scratch, with all the necessary amenities.

Blanchet illustrates how suburbs were created during the era of the 1950s, springing from an idealistic vision of building quaint havens for workers to promote family and community values. But the underlying question is whether these values can be “created” like the towns themselves.

White Rapids is more than just a town that happens to have an electric plant. It is a town that exists, lives and breathes because of the power plant itself. Although Blanchet mixes fact and fiction, he captures the bemused contentment of small town life, showing the residents at Christmas and during a local competition to catch a legendary pike in the lake. The idealism of the town is reinforced by the fact that it is in the middle of nowhere and hardly accessible. But once electricity becomes nationalized in Quebec, the town soon loses its raison d’être and falls into abandon, becoming a relic and oddity of a time gone by. Readers will be enchanted by this charming story, while hardly realizing they are learning a bit of history at the same
time.

The Invention of Hugo Cabret (Scholastic Books, $27.99) by Brian Selznick (Ages 9 and up)

At first glance this book looks like an intimidating tome, weighing in at 526 pages. But once kids open it and realize that 75 per cent of the book is illustrations, they will be immediately eager to delve into such a “big” book. 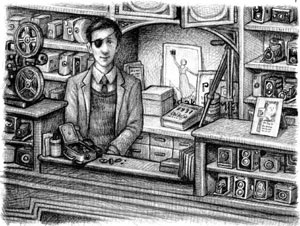 Hugo Cabret is a 12-year-old orphan who lives among the shadows of a Paris train station, his cleverness helping him evade the authorities. His father, who was a clockmaker, left his son with a mysterious gift: an automaton. A primitive type of wind-up robot, Hugo becomes obsessed with discovering the key to how it works. In his quest he crosses paths with an old toymaker who holds the secret behind the toy and a young girl who can help him. The minimal text heightens the mysterious feel of the book as does the early cinematic feel that it conjures. Children will be enthralled by the book’s suspense, examining every detail of the 300-plus illustrations to crack the mystery.