The importance of International Women’s Day, which is celebrated on March 8, can’t be stressed enough. Yes, women have made great strides in having their rights recognized, particularly in Western society. However, the sense of equality that women and girls now enjoy can make it easy to overlook or forget that these rights were gained through long and arduous struggles that should never be forgotten. To truly appreciate how far women have come, it can help to delve into the lives of the women who helped make those inroads. Here are some books that give young readers some perspective on the constraints once placed on the lives of women.

The Evolution of Calpurnia Tate (Square Fish Publishing, $8.99)
by Jacqueline Kelly – Ages 9 to 12 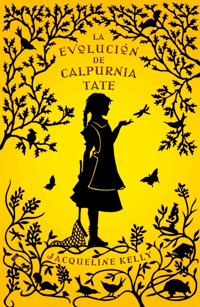 This charming novel is set in the late nineteen-century Texas, when girls are expected to knit, make pies and learn other skills that can increase their value as debutantes in search of a good husband. However, 11-year-old Calpurnia Tate has other plans. She is fascinated by nature and has taken an interest in Charles Darwin’s controversial theory of evolution. Calpurnia then discovers that her grandfather, who is a member of the growing National Geographic Society, is also an enthusiast of science and nature. Together, they spend afternoons exploring nature and he teaches her about the greatest scientific minds, including some women. Encouraged by what she is learning, Calpurnia begins to contemplate the idea of going to university, but it seems impossible after overhearing her parents discussing her future prospects. The author creates a clever parallel between Darwin’s belief that nature evolves by adapting to its environment and life as it is unfolding for Calpurnia during her years as a young girl. The novel ends at the turn of the twentieth century as new scientific discoveries are happening rapidly, which leaves Calpurnia with a sense of hope that society’s views about women may also evolve over time.

Hyena in Petticoats: The Story of Suffragette Nellie McClung (Penguin Books, $15)
by Willow Dawson – Ages 10 to 14 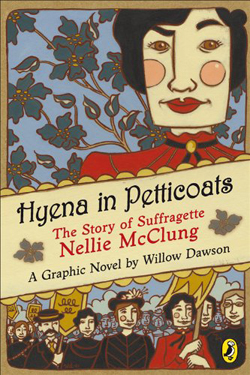 Nellie McClung is one of the great Canadian pioneers of women’s rights, yet she is hardly a household name. Thankfully, author Willow Dawson brings McClung’s courageous story to life in this graphic novel that uses warm, colourful drawings that will appeal to young readers. The book traces her life from a childhood in rural Ontario to a career as a schoolteacher in Manitoba and then on to her work as an activist for women’s rights. McClung’s main achievement was helping women gain the right to vote, first in Manitoba, and then in other provinces across Canada. Readers discover how McClung began to see the sexism, racism and injustice in society. Then she begins to advocate for all marginalized groups, demonstrating that the struggle for justice is one that must be done in solidarity with others. It is an important lesson for young girls, who, in learning about the fight of their foremothers for their rights, will better understand the struggles of other groups facing injustice and will feel solidarity with them. 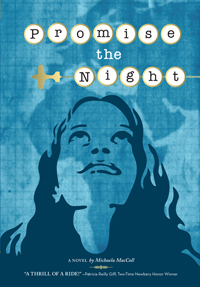 Many people have heard of Amelia Earhart and her daring exploits in aviation, but few would be able to name Beryl Markham as part of the same pantheon of early female aviators. In 1936, this remarkable woman made the harrowing solo journey across the Atlantic Ocean from Europe to North America by plane. In this book, readers learn of Beryl’s early teen years growing up along the wild plains of East Africa. Beryl’s father, who is raising her alone, must travel to Nairobi and so he entrusts his daughter to a local tribesman. While staying with the tribe, Beryl defies the stereotypes assigned to women by convincing the tribal chief to teach her to hunt. The author cleverly intersperses the young Beryl’s story with fictional excerpts from the older Beryl’s flight journal. This dual storytelling technique shows readers how Beryl always stayed true to her fearless spirit, even in the face of stereotypes meant to pigeon-hole her. She never questioned what she could achieve despite people’s low expectations of women. MacColl beautifully brings to life this fascinating character, who dared to defy the patriarchal world she lived in by following her dreams.