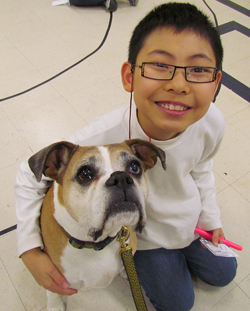 For many Canadians, growing up with an animal is a cherished memory.  People often speak of the companionship and unconditional love offered by a pet, not to mention the responsibility of caring for another living being.

However, pet ownership may not be possible or practical for families. Thanks to a program called PAWSitive Leadership, some Montreal elementary-school children are getting the chance to interact with a dog for a series of weekly sessions.

Started by Taryn Graham in 2010, PAWSitive Leadership offers an eight-week program in which she and a team of volunteers bring dogs into local classrooms to teach children about safety around dogs and the role of animals in society. She also addresses topics like bullying and the importance of being considerate to people and pets.

Graham got the idea to start a company after watching the way children res-ponded to her St. Bernard, Baloo, when he was being walked in the park. “Many children would run up to pet him,” she said.  “I started using these encounters to teach children how to properly approach an unfamiliar dog, and how to properly act towards dogs.”  If the dog has not been well socialized, meaning it has not learned how to respond appropriately to people, it could snap or bite. 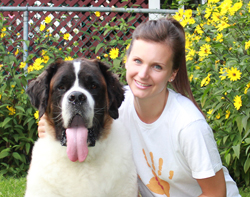 Graham, who has a Bachelor of Arts in Human Relations and is a current graduate student, had spent eight years training and rehabilitating rescue dogs, as well as training therapy dogs to work with children with autism spectrum disorder.

Deciding to build on this experience, Graham developed several different lesson plans tailored to various grade levels, and began approaching schools.  Last year, she worked with several within the English Montreal School Board, including the Mackay Centre and Westmount Park school daycare.

The first lesson is always about safety: how to approach an unfamiliar dog, how to read its mood, and what to do — and what not to do— around it.

After covering basic safety, Graham moves on to topics such as  responsible ownership, the bond between animals and humans, and empathy and understanding.

“Children are often asked to label how a dog may be feeling in a certain situation,” she says. “It teaches them to recognize how other people are feeling and to be more considerate of that. It’s about emotional intelligence.”

The sessions also provide a comfortable space where children can raise difficult topics, she says. For example, in one classroom a child brought up NFL quarterback Michael Vick’s conviction for dog fighting, which led to a discussion about greed, bullying and the need to stand up for those who cannot speak up for themselves.

Colleen Flint, coordinator for the Westmount Park School daycare, arranged to bring Graham into the classroom after being referred by the English Montreal School Board.  She said that the children enjoyed the opportunity to interact with the dogs.

“It was a good learning experience for them,” she said. “There was a lot of focus on how to respect a dog, how to walk a dog, how to act around a dog.  Some of the kids who started out fearful were able to overcome that fear, and a couple of the parents even told me they learned some things about dogs as well!”

PAWSitive Leadership has a roster of 10 dogs that are accompanied to sessions by their owner. To participate, each dog must pass a 10-step certification process designed by Graham and an animal behaviourist in order to ensure that it’s calm, friendly and safe in a classroom setting. 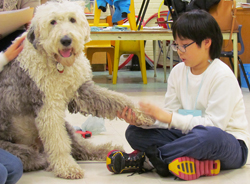 Graham says dogs can often pick out the child most in need of some canine love and affection. “Many times a dog walks in and sits right beside that kid who is disruptive,” she says.  “In one case, it turned out the child had ADHD, and petting the dog helped him concentrate.  Another time, a kid with a stutter found it went away when he was with the dog, because he felt more comfortable.”

She stresses that the goal of her program is not to encourage kids to pester their parents for a dog.  In fact, Graham, who only became a dog owner when she was an adult, says that many of the lessons focus on the enormous responsibility of pet ownership. Instead, she hopes that by interacting with the dogs, the children will gain a greater understanding of their two-and-four-legged friends.

“I really feel that by teaching children respect, responsibility and empathy towards animals, we can foster a more compassionate generation.”