Lucy Buscemi is a principal with a mission that touches the very heart of education – she wants her students to graduate with skills that go far beyond reading, writing and math. She hopes they leave John Caboto Elementary School having developed the ability to plan, listen to others, have initiative and work as a team, which she says will help them achieve a satisfying, happy life.

To accomplish her goal, she enlisted the help of Frank Lofeodo, a Spiritual Community Animator at the school who had attended a life-changing workshop with her four years previously when they both worked at John F. Kennedy High School. The two educators had learned principles such as being proactive, listening to others, planning ahead, etc., based on best-selling author Stephen R. Covey’s The 7 Habits of Highly Effective People. 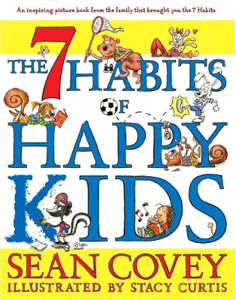 Committed to putting the habits into practice, they soon began wondering how they could help students adapt these principles. They discovered that Covey’s son, Sean, had published The 7 Habits of Happy Kids, a simplified version of his dad’s book. So, armed with copies of the book, the two set out to transform the school community.

The first step was to offer workshops to the staff and later host a full-day event that included a presentation during the day for the students and one at night for the parents. “For this program to be effective, everyone has to be on board,” Buscemi says.

At the same time, Lofeodo began incorporating the habits into his classes, introducing children to the concepts through stories and examples from real life. Just recently, he saw the effects of this training after a student’s mother died. Lofeodo talked with the student’s classmates about the importance of listening (habit 5: seek first to understand, then be understood) and putting yourself in another’s person’s shoes. “His classmates were really there for this boy,” Lofeodo says. “They were empathetic and listened to what he had to say.” He also said that the ideas underlying these habits, such as listening to others first and then talking, have been discussed by philosophers for hundreds of years.

To reinforce the theme of the 7 habits, Buscemi decided to visually represent them through a mural painted in the school’s gym. She points out that the gym is where school assemblies are held, parents come for meetings and people vote during elections, so the painting would be seen by many in the community. She hired a local artist to create a water-themed mural (a nod to Italian explorer Giovanni Caboto, the school’s namesake, who sailed from England to North America, probably landing in Newfoundland.) Each habit is represented by an island and at the centre of the mural are the words “John Caboto School: Nurturing Leaders One Student at a Time.” Buscemi says that the entire school community has become engaged with the 7 Habits.

In fact, parent and governing board chairman Enrico Perugini says his decision to enroll his son at the school was in large part because of its commitment to the 7 Habits. “I think all the schools should be offering something like this,” he says. “The habits are all about facilitating human interaction. It creates a sense of community, and it helps reduce problems like bullying. It’s a very beautiful thing.”

What are the 7 Habits?

Businessman Stephen R. Covey wrote about what he called The 7 habits of highly effective people in a book published in 1989. Then his son, Sean Covey, took the idea and simplified the language to make it appealing to children and teens and published a book called The 7 Habits of Happy Kids. Below is a list of the habits, with the “adult” terms on the left and the simplified version for kids on the right. 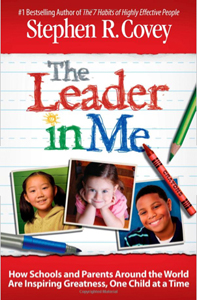 Information about using the 7 habits with children and teens, including worksheets and videos, can be found on Sean Covey’s website www.seancovey.com. Visitors will also find information on a new book, The Leader in Me, written Stephen Covey, detailing how several schools in the United States have used the 7 habits to improve students’ grades, reduce bullying and increase morale.