Streets closed off to promote play

With Montreal-area parks having had a huge surge in use since the pandemic began, there has been a burgeoning demand for space for kids to play. As a result, several boroughs have closed off streets to cars.

This summer, Bernard Avenue in Outremont was closed to cars and bicyclists to make room for sandboxes and pedestrians. Birnam St. in Parc-Extension closed down to traffic so that local residents could play, discuss, and take ownership of the street. And after a successful couple of months in 2020 that saw 42 streets in Verdun designated “play streets”, the borough brought back the same program for 2021.

While some streets are closed completely to cars, others are partially closed and outfitted with signs that warn “Slow down – free play allowed on this street” with flower boxes or removable bollards to reduce the speed of cars.

In Mercier– Hochelaga-Maisonneuve, a new play street was created in August with brightly painted swirls and games where children can engage in free and active play. In the permanent multi-game zone located at the intersection of Tiffin and Baldwin Streets, playful kids and adults can enjoy games such as hopscotch, a painted maze, a ball hockey zone, and more. The asphalt road lends itself to activities not always possible in local parks, like skateboarding, rollerblading, and tricycles. 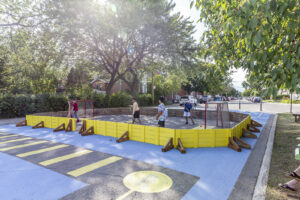 A couple of blocks away at Joffre Rd. between De Grosbois and Berlinguet, the Défi-cycle is a temporary bike course aimed at promoting the development of kids’ cycling skills.

On the recommendation of the mobility committee, the borough had been considering closing Joffre St. since 2018. The idea of ​​creating a bicycle zone was proposed by Solidarité Mercier-Est, L’Anonyme and Tandem Mercier−Hochelaga-Maisonneuve. And while the development of the bike route was intended to be temporary, it will be reinstated for 2022. The Défi-cycle is scheduled to remain until the beginning of November, with the reopening of the street to vehicular traffic on November 6.

And if you want to head down to the river, the new Bio Diverse Cité route connects the parks of Promenade-Bellerive and Thomas-Chapais along Pierre-Bernard Blvd. Those who walk it can follow the various information capsules on the ground and learn more about urban diversity and how to best protect it. The project is part of the work previously undertaken on Pierre-Bernard Blvd., which made it possible to remove concrete spaces from the sidewalks, leaving more space for trees and greenery.