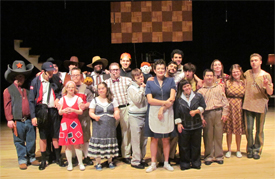 It’s one week before opening night and the actors from the I Can Dream Theatre Group gather on stage to rehearse their production of Hannibal the Musical. They’re poised, getting into place. They’re eager to begin their first dance number. Sitting in the first row, director Ada Masciarelli gets up.

“Guys, we have a whole stage!” she says. The group isn’t used to practicing in such a large space, Concordia’s Oscar Peterson Hall in N.D.G. In one week, the hall will be filled to near capacity for the big première.

Within seconds, Masciarelli jumps onto the stage, guiding the actors to their marks, with help from production manager Tricia Bartley, a wearer of many hats who emerges seemingly everywhere and every time she’s needed. “Move over.” “Go here.” “Spread out.” “To the right.”

Bandleader Michele Matthews sits in a chair, facing the stage, acoustic guitar in her lap. She’s in socking feet, having kicked off her rain boots earlier. She waits for her cue. The actors seem unfazed by the whirlwind of activity around them. They listen attentively to Masciarelli and Bartley, while tape is placed on stage so show the actors where to stand. Masciarelli returns to her seat as crew members rush behind the scene. Matthews gets the green light.

The band begins to play “It’s My Life,” the Bon Jovi hit song. The actors sing and perform their choreography, and Masciarelli bobs her head to the music as she watches. The song ends. Amid applause from the few onlookers at tonight’s rehearsal, the actors scurry off stage to prepare for the next scene.

Masciarelli, Bartley, and Matthews founded the I Can Dream Theatre Group three years ago to help people with special needs express themselves through singing, dancing, and acting. The three educators have more than 70 years of experience working with individuals with special needs.

“We want the title to catch people,” Masciarelli says of Hannibal the Musical, which she also wrote. The play centres around Hannibal Lecter — the popular character from the Tom Harris novels and countless TV and film adaptations. But that’s where the similarities with the source material end. In the I Can Dream’s production, Lecter has a brother Harry, his dad is Fred, his cousins are the Bradys, from television’s The Brady Brunch. They — and other characters from TV in the ’60s and ’70s — are gathered for a big neighbourhood barbecue.

Besides being extremely entertaining (the troupe performs songs by Beyoncé, Bruno Mars and The Beatles, among others), the play and the I Can Dream initiative are outlets for participants to better develop their personal and social skills, from the audition process to the final performance.

“We see it, time and time again, [the actors] come out of themselves,” Masciarelli says. “Some of these guys who have been here since the beginning …”

Philip Peris is one of these actors. The 23-year-old loves to act and dance.“I’m a pretty good dancer,” he says with certainty. “Whatever Michele [Matthews] wants to do, I’m OK with that.”

He says he was nervous when he started acting, but you couldn’t tell by watching him on stage, delivering his lines as Bobby Brady without hesitation and with a witty sarcasm when necessary. Peris says theatre makes him feel good.

Ainslie Macdonald feels the same way. Since her debut in last year’s I Can Dream production One Night at the Copacabana, Macdonald, 21, knew acting would be a perfect fit for her. She plays a convincing Jan Brady and nails the delivery of the classic line: “Marcia! Marcia! Marcia!”

“It’s a lot of work, but it pays off once we’re done with the show,” she says. “It makes me feel really proud of myself.”

Diego Noya, 22, first heard of I Can Dream through a former cast member. Noya, an avid dancer and singer, attended last year’s production of One Night in Copacabana. This year, he’s a member of the Hannibal the Musical cast, portraying Hop Sing, a character from the TV show Bonanza.

During the rehearsal’s intermission, Matthews describes the difference between tonight’s performance and opening night. “This is a mess, you think, how are they ever going to do it?” Matthews says of the rehearsal. The show is just one week away, and there are many things to iron out.

Bartley is quick to add, “Every year we say that and every year they do it. The second the costumes come on, they become their characters. It’s amazing to see the transformation.” The other two women nod in agreement.

One week later, the transformation begins. It’s the second night of two Hannibal the Musical performances. The lobby is packed with people, and the seats in the hall quickly fill up. You’d think trained professionals are about to take the stage.

As the curtain opens, Hannibal is wheeled in, donning the iconic face mask. Actor Andrew Raymond Perez delivers his line with wit and charm. Applauding after every song and giving a standing ovation as the show comes to an end, the audience is eating it up, fava beans and Chianti not required.

For more information, go to icandreamtheatregroup.com.