Should You Take the Kids to: Montreal Comic-Con 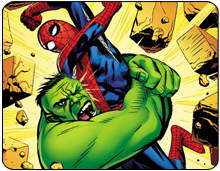 Moms: Superheroes do NOT eat muffins.

As a mother of two sons, I have come to realize that superheroes are not a phase.
They are part of our family.
They are a way of life.

Before they were verbal, our sons would lunge at images of Spider-Man. Soon after first words like “duck” and “bottle” came words like “The Fwash” (The Flash), “Batman” and “Juggernaut”. Not to mention The Hulk imitations. It’s in the DNA.

Looking at a picture of Spider-Man and several villains, our two-year-old noted that the villains “are not happy.”
Since we were all eating breakfast, I joked, “Maybe a muffin would make them happy?”
“No!” they blasted me in unison. Then my five-year-old said: “Mom, they won’t be happy until they’ve defeated Spider-Man!”

Got it. You don’t joke about that kind of thing.

I urge all parents of boys around age five and up to consider brushing up on their superhero knowledge at Montreal Comic-Con on Sunday. The event is a celebration of all things related to comics, and will feature more than 40 creators of comics, sci-fi and manga. Even those who draw A-list heroes like Super Man, Wolverine and Batman will be there.

While they sketch, there will also be actors and voice actors from comic/sci-fi-related shows and movies on hand to sign autographs. One of them is Richard Hatch, who played Captain Apollo on the original Battlestar Galactica TV series and appeared in the more recent version of the show.

This is also a chance to get another use out of those superhero Halloween costumes. The event features a masquerade competition, and the best costumes get prizes. Some participants perform skits on stage, to music of their choice.

Also at the event: Sales of comics, toys, cards, DVDs and T-shirts.

Attention mothers: Once you’ve learned to distinguish between Iron Man and Captain America, you’ve earned the right to leave dad and the boy(s) and head on over to the Salon des Métiers d’Art (a huge fair of local, handmade gifts), which is also going on at Place Bonaventure Dec. 4 to 22.