Should you Take the Kids to: Montreal Comic-Con 2010 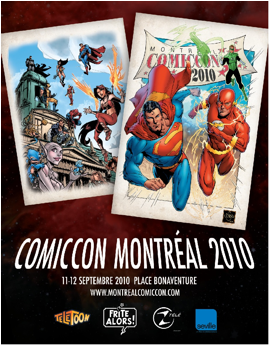 If superheroes, Transformers and Star Wars characters have become a part of your family since having children, you will probably feel right at home at Montreal Comic-Con 2010. Having enthusiastically attended two Comic-Cons, I can say that this convention will be of interest to fans as young as 3 or 4 years old.

More than just a comic-book buy/sell event, Comic-con has lots to keep younger kids busy. First of all, prepare to shell out for some new toys – there are vendors selling lots of superhero and other comic-book related toys – some new and some secondhand. Some of the stuff is expensive, and targeted at adult collectors, like Star Wars light-sabre replicas and busts of characters like the Incredible Hulk. Still, it’s fun for kids to look at.

Watch out for Chewbacca and Storm Troopers!
If your child has a superhero or other character costume, this is a perfect occasion for them to wear it! There are lots of people walking around Comic-Con in crazy costumes, hoping to win one of the contests during the event.

Aside from toys and comic-book browsing, there are artists and actors at the event – like Billy Dee Williams, who was Lando Calrissian in the original Star Wars trilogy.

Also, this year, the time-traveling car from the movie Back to the Future will be on site for photo ops.

Good to know: For lunch, there is an indoor food court area at Place Bonaventure.

Have you ever taken the kids to Comic-Con? Dads, doesn’t it sound like the perfect event for you to take the boy(s) for 2 hours minimum? Sure, it does!