Home / April 2013 / Should kids wear shoes when learning to walk? 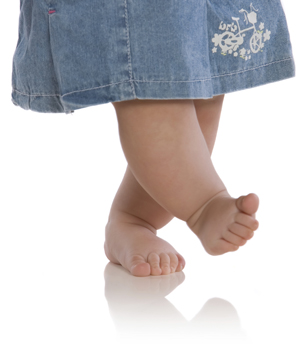 Learning to walk is a milestone, a memorable moment often captured on camera.  As those first tentative steps multiply, parents may find themselves bombarded by conflicting advice and wonder whether there’s any value in strapping little feet into wee running shoes or whether it’s best to keep their babies barefoot.

Dr. Thierry Benaroch, an orthopedic surgeon at the Montreal Children’s hospital says that, in general, it makes no difference if a child learns to walk barefoot or with shoes on. “Shoes are protective not corrective,” he said. “They don’t change anything and don’t make a difference.”

He also says it is a non-issue for kids who are pigeon-toed, web-toed, flat-footed or tip-toe walkers. None of these ailments are the consequences of having worn or not worn shoes. Usually, he says, these conditions have a natural way of eventually correcting themselves. Whether a child is barefoot or wears shoes when learning to walk, it doesn’t usually affect the foot’s arch, its structure, or its functionality, nor does it weaken or strengthen the leg or ankle muscles.

Dr. Shazia Malik, a Montreal podiatrist who has her own private practice and works at several hospitals, says kids should be barefoot as much as possible, at least until they become strong walkers and have proper balance. “It helps them with their spatial relationships, tactile sensation, proprioception (their sense of the relative position of neighbouring parts of the body and the effort being employed in movement) and neurological connections,” she said. 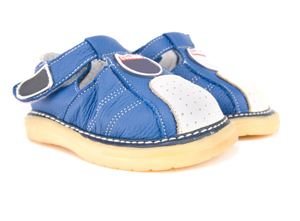 When choosing footwear, Malik recommends parents look for shoes that aren’t too heavy, rigid, tight or soft. Of course, the right size is important, as is good flexibility, “The shoe should flex in the right place; not in the middle of the foot, but at the big toe joint.”

Livia Avrith says her pediatrician advised keeping her son barefoot as much as possible, “I feel that when he’s barefoot he has more stability and he can grasp the floor better, rather than when he’s wearing a shoe, which is foreign and prevents him from really feeling what’s underneath him.”

The idea of properly feeling the surface when learning how to walk is advocated at Le Gym TMR. “There’s nothing like skin touching and feeling the mat, the balance beam or bars,” says owner Deana Morrow, herself the mother of two young children, ages 2 and 6. “A lot of information comes through the feet. Babies get to know their environment and surroundings through their feet as much as they do through their hands.

“Our experience with babies is that you can actually see a difference in how they stand and move when they have nothing on their feet. They get the full feel and pressure (of the mat), and their toes grasp the surface.”

And for Morrow, keeping children barefoot is valuable even before babies start walking. “I promote babies being barefoot even during tummy time, which is the start of them learning how to crawl. I see how, when they’re trying to bend their knees to get up and crawl, they have a better grasp when barefoot.”