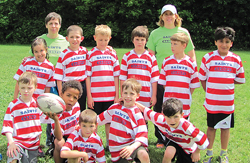 Although hockey remains the king of the Canadian sporting scene, rugby is hot on its tail. Buoyed by its inclusion in the 2016 Olympic Games, full-contact rugby is one of the fastest growing team sports in North America. And here in Quebec, local clubs are feeling the boom.

“Over the past five years, the scene has just exploded,” says Craig McDevitt, a coach and former player for the elite Montreal Irish squad. “Back when I started 40 years ago, nobody played rugby. Now about half of the people who sign up are second-generation players, and the other half is new to the sport.”

Rugby is played with either seven or fifteen players per side, and its rules are sometimes described as a cross between soccer and football. A team tries to advance the oval ball by kicking, carrying, or passing it. Points are scored either by touching the ball to the ground in the opponents’ end zone or kicking the ball over the crossbar between the goal posts. While the ball carrier is tackled, as in North American football, play is much more fluid and there is no blocking or forward passes.

The game was started in England in the 1820s and has been around in Quebec since the 1860s, but it’s only in the last 20 years that the sport has taken off, especially for youth.

Now, there are numerous “mini-rugby” clubs for players 5 to 12 years old, with modified rules and no contact for children 10 and younger.

“There is no contact until the U12 level (for 11- and 12-year-olds), and even then, it’s done gradually, by teaching first position, and then how to fall. It’s ‘gentle rugby.’ ”

The game is played without padding, and like any contact sport, there is a risk of injury and concussions. But Bieber believes that when properly taught, rugby tackling is less likely to cause injury than some other types of contact. Only the ball carrier can be tackled, which minimizes collisions and makes ball carriers aware of when they will be tackled. Nevertheless, she admits that “any time there’s contact, there is concern about injuries.”

McDevitt now sees the game from a different angle: as coach and father to two 11-year-old rugby-playing boys. He says that he is always concerned for his sons’ safety.

“I think that the coaching and the way tackling is introduced is key,” he says. “Overall it’s as safe as a physical contact sport can be, but I am always concerned. You have to be.”

Nevertheless, his concerns haven’t stopped him or many other parents from enrolling their kids. “The game itself is so fun, and there’s an equal chance for everyone to participate, to carry the ball and score” Bieber says. The game is fast-paced, the action is non-stop, and teams develop close bonds.

One of the fastest-growing segments of the rugby market is the girls’ and women’s game, perhaps because of the success of Canada’s elite women’s teams, and perhaps because it is one of the few women’s sports that allows contact.

For McDevitt, another attraction is that the game is very inexpensive compared to some other sports.  Registration fees are low, and no special equipment besides a pair of cleats is required. Most mini-rugby programs in the Montreal area meet once a week, a commitment that is manageable for busy families.

To find a club near you or for more information, visit rugbyquebec.com.