Dressed in a sparkly pink and yellow costume, Alexandra Shtrevensky strode onto the dance floor during a recent competition, armed with a plastic hoop and a confidence that belied her 12 years.  As the music began, she began to toss the hoop, spinning and tumbling and dancing with it, on her way to the 2013 Canadian Novice rhythmic gymnastics championship.

Alexandra has spent the last six years training seriously as a rhythmic gymnast, a sport in which individuals or teams perform routines to music while manipulating equipment such as balls, clubs, ribbons and hoops. Their routines also include dance and tumbling moves such as cartwheels or somersaults.

Alexandra .works out five .days a week at the Questo Rhythmic gymnastics club, one of Montreal’s two main competitive clubs. She often competes at the national and international level. Her mother, Anna Shtrevensky, says the sport has helped her daughter increase her focus and attention, as well as improving her overall athletic ability. “It takes a lot of coordination, since it’s a combination of different sports (ballet, gymnastics and dance).  You can see the difference in the way she carries herself, in the way she walks.”

Helen Nowell, spokeswoman for Rythmik Québec, the city’s other main club, says the sport has a great deal to offer to young children – even those with no competitive aspirations. It integrates dancing, tumbling and the use of equipment into a sport that is both challenging and fun.

“You have to be able to move to the music, but also throw, catch, and manipulate the equipment.  It’s a technical sport, very difficult at its highest level.  But at the same time, it’s fun. Who doesn’t like dancing and twirling a ribbon?” 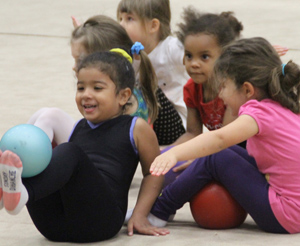 Rhythmic gymnastics is well established in Montreal, with the city’s main clubs offering programs and opportunities at both the recreational and the competitive levels. Mom-and-tot classes are offered for children as young as 18 months, with regular classes beginning for children between the ages of 3 and 5.

Early on, the classes include stretching, climbing, and group dance, with more challenging routines involving equipment being introduced gradually.

By the time children reach the age of 8 or 10, they can continue to perform individually or as part of a team of girls, adding an element of teamwork and a social aspect to the sport. As Shtrevensky notes, “The girls develop together, they dance together, and come to understand each other.”

Girls who aspire to higher levels can try out to become part of the pre-competitive or competitive streams, where they can train to compete at the provincial, national, and even international level. Judges award points based on the quality of leaps, balances, pirouettes (pivots), flexibility, apparatus handling, execution, and artistic effect.

However, even recreational-only competitors can perform in shows and exhibitions, as well as citywide competitions such as the Jeux de Montreal.  Recreational programs at both Rythmik Québec and Questo include the opportunity to participate in summer camps as well as group dance shows and exhibitions.  Last year’s Christmas show at Rythmik Québec drew 800 spectators to watch the girls perform the story of Cinderella.

“Because the sport is always done to music, it lends itself well to performances,” Nowell says.

Although girls dominate the sport, boys are welcome too, and some are currently enrolled at the younger levels. Nowell adds that the sport is best suited to kids who have a lot of energy, love being active and enjoy dance and performing.

For Shtrevensky, rhythmic gymnastics has given her daughter self-confidence, maturity and the ability to balance her schoolwork with the demands of competition. “It’s very hard work.  She trains hard and it shows.” But, when asked what her daughter appreciated the most, Shtrevensky answers, “She loves the dancing. When she dances, she doesn’t feel like she’s competing.  She’s dancing for the public.”