Travelling with children, especially young ones, requires preparation.  Not only do parents have to organize itineraries, pack efficiently and confirm hotel reservations and flight seating, there’s another issue to think about – health precautions, and whether you need any vaccines before travelling.

The JD Maclean Centre for Tropical Diseases at McGill University, located at the Montreal General Hospital, provides pre- and post-travel information and medical help. The pre-travel service offers general information on how to prevent illness and gives vaccines to those who require them.  The post-travel service serves leisure travellers as well as aid workers, volunteers, students or missionaries returning to Montreal with a medical problem.

If you’re planning a trip with your children, the first thing to do, says the centre’s director, Dr. Michael Libman, is to make sure that all their regular vaccinations, like tetanus shots (which need to be boosted every 10 years) and measles vaccines, are up-to-date. After that, he says, it depends on where you’re going, your age, health and other factors.

“We’ll make an assessment based on itinerary,” Libman said. For example, if you’re travelling somewhere in India where sanitation might be problematic, he would advise a vaccine against typhoid. In parts of Africa and the Amazon region, the yellow fever vaccine is recommended, and some countries require travellers to get it. A child’s age also needs to be considered. The Public Health Agency of Canada recommends the typhoid vaccine not be administered to children under 2; the yellow fever vaccine is not recommended for infants. “Some vaccines can’t be given because the risk tolerance is high,” Libman said. “It’s always more dangerous to take a very young child to India or Africa versus Disney World. Parents need to understand what the risks are.” 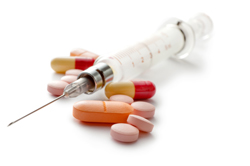 No vaccine is 100 per cent risk-free, says Libman. But generally side effects are few and they usually appear as either a fever that will last one to two days at the most or a slightly sore arm. “Children are prone to more or less the same diseases as adults,” he said, “but usually they tolerate them less well.”  So the risk could be far greater if the child gets the disease rather then if the child gets the right immunization.

Libman suggests that travellers visit the clinic at least six to eight weeks before departure for a proper assessment.

For families whose vacation spots fall more in the range of southern beach destinations, vaccines like Hepatitis A are important. According to guidelines of both the World Health Organization and the Public Health Agency of Canada, the Hepatitis A vaccine can be given to children starting at age 1.

“Babies who are being breastfed or are drinking formula and eating food from a jar are less prone to Hepatitis A,” said Dr. Charles Hui, a paediatrician specializing in infectious diseases at the Children’s Hospital of Eastern Ontario and a Canadian Paediatric Society representative.

If you’re going to the Dominican Republic, anti-malaria tablets should be considered before, during and after your trip. Hui says that even a child as young as 6 months old can be given anti-malaria medication, because there are doses for infants who weigh as little as five kilos.  The medication can have powerful side-effects, including hypersensitivity to the sun, stomach upset, sleeplessness and behavioural issues. Again, the risk factors should be assessed and discussed to decide whether or not a 6-month-old baby needs it.

“Parents may worry that anti-malaria medication is strong. But the medical community considers it less of a threat than getting life threatening diseases,” Hui explained.

Aside from vaccines, there are other precautions to take. Drinking bottled or boiled water and eating food that is properly cooked, and fruit that you peel yourself is a smart way to avoid diarrhea, which affects 20 to 25 per cent of people who visit places like Cuba, Mexico or Dominican Republic. Children are less tolerant than adults and they’re prone to quicker dehydration. To steer clear of diarrhea in babies, breastfeeding is an effective option, “it’s clean and a safe alternative,” Libman said.

Preventing diseases that can be transmitted through mosquitoes and insect bites is also important. Covering a child’s stroller with a net is recommended, as is packing insect repellent that contains DEET.

Parents should keep their kids away from dogs and other animals in foreign countries.  And parents need to know what the health resources are in or near where they’re staying and ensure that they have medical insurance.

Being pro-active when you get back home is also important. If you come back with diarrhea, most general physicians can treat that. But if you come back with a fever that lasts longer than a day and you don’t have an obvious cold or flu with a runny nose and a cough, and you’ve just visited a malaria prone region, Libman urges that you go to his clinic.  “Malaria, which is lethal, can develop rapidly and can only be diagnosed through a blood test,” he said. “We specialize in exotic diseases and have the expertise, the resources and technology to diagnose and treat the particular and unusual diseases.”