When Keyan was about 3 years old, his parents became increasingly concerned about his behaviour. The little boy had difficulty interacting with other children and had several behavioural “quirks.” For example, he would repeatedly ask questions as a way to engage someone but wouldn’t actually participate in the conversation.

After several visits to the doctor and various tests, his parents were told that Keyan had Asperger’s Syndrome, a mild form of autism. His parents realized he would need special services but they weren’t sure where to find them. Many children Keyan’s age were attending preschool and his parents hoped to enrol their son for both social and academic reasons.

But finding a preschool that could accommodate Keyan’s special needs proved difficult. Too often, the staff didn’t have the training or resources needed to work with an autistic child.
Then Keyan’s parents heard about Coco’s Place, a specialized preschool program for children with autism. At this centre, the boy would not only receive therapy and support but he would eventually share class time with kids dubbed “neuro-typical” (meaning without autism).

The idea for an integrated preschool program was the brainchild of  Sharon McCarry, whose own son, Colm, has autism. “When he was little, I couldn’t find a place for him to socialize,” she recalls. “Every time we’d go somewhere, we’d be asked to leave, because they didn’t have the training or the patience to help him.”

The experience and the frustrations stayed with her. Then, she heard that a preschool in Montreal West, the Little Red Playhouse, was on the brink of bankruptcy. She . decided to leave her job as a marketing executive, take over the preschool and add in a specialized program for children with Autism Spectrum Disorders (ASD).  Her vision was a place where children with autism could spend part of their day with specially-trained educators, but also play with other children in the Little Red Playhouse’s regular program. 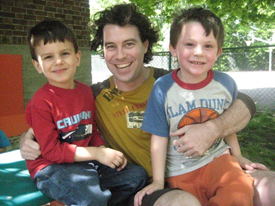 Today, her vision is a reality. When a child starts at Coco’s Place, he or she receives a thorough evaluation and then an individualized program to follow, notes Jonathan Pehleman, a specialist at the preschool. A key component of the program is usually Applied Behavioural Analysis (ABA), one of the therapies recommended by the Quebec government. (Unfortunately, wait lists for ABA therapy in the public system tend to be very long; so many families seek private treatment like those offered at Coco’s Place).  Then, In addition to specialized services, children with autism also work on their social and communication skills by playing alongside students enrolled in the Little Red Playhouse.

That’s just what has happened to Keyan, who now spends about half his time in a small group of four or five children working with a specialist, and about half the time at the Playhouse. Keyan’s father, Peter Gibson, says his son’s behaviour and communication skills have improved significantly since starting at Coco’s Place last fall. “He’s more focused and better at staying on task,” he notes, adding that his son can now have a back-and-forth conversation with another child, instead of just repeatedly asking questions. As well, Gibson points out that Keyan’s younger sister, who does not have autism, now attends Little Red Playhouse too so the siblings can go to the same school.

For more information about Coco’s Place, call Sharon McCarry at (514) 994-5018 or visit www.cocosplace.ca. The group offers ABA intervention services for older children in the afternoons and runs a summer day camp.