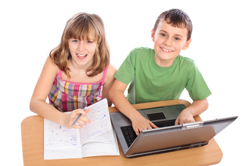 We all know someone whose 2-year-old can find his way around an iPad with ease before he can form complete sentences.

Scholars call these children “digital natives.” And one Montreal-based, not-for-profit organization is trying to make sure that this generation is able to fully grasp the technology that increasingly surrounds them.

They want your kids’ computer education to go deeper than learning to create PowerPoint presentations and surfing the World Wide Web – they want Canadian children to learn computer programming: the process of writing sets of instructions to allow computers to perform certain tasks.

Coding is the basis for computer programs, websites and the applications we use on our computers and smartphones. The goal is to get boys and girls of all cultural and socioeconomic backgrounds to understand how computer programs are created and get them interested in computer programming and  better equip them for their eventual foray into the workforce. Jobs in computer science are abundant – in Canada and globally.

“Looking at what is likely to happen in 10 to 20 years, with children growing up in this this high-tech world and not being taught (coding), it was almost, to me, like they weren’t being taught to read and write,” Arthur said.

The team offers courses in both French and English to students in Grades 3 through 6, with expansion plans to include Grades 1 through 8.

One of the guiding beliefs that drives Kids Code Jeunesse is that coding should be part of the curriculum, and not an extracurricular activity, so that all children can participate. Their courses are free for schools and parents. So far, they’ve taught about 600 students and they’re still in pilot project mode.

Learning computer programming gives children instant results – if they do it right, they see the results of their work right away. But programming is also about details; one misplaced or forgotten character can throw everything off.

“If they don’t get it right, the computer won’t understand the command,” Arthur explained. “They get frustrated, but it’s part of [learning] patience, and that’s what we try to teach them.”

The team uses Scratch, a programming language developed at MIT especially for children and teenagers, and works with teachers to ensure that the coding projects are in line with the government curriculum.

When the team goes to a school, they try to invite as many people – teachers, staff, parents – as possible to the introductory session so there is a network of people who are at least familiar with what the students are doing, in case they run into problems.

Students at General Vanier Elementary School in St. Leonard created their own websites last year as their final project. The websites look rudimentary at first, until you realize that the students created them from scratch, without the help of pre-made templates available online.

A team of volunteers, university students and working programmers help teach the students. Arthur, who runs an IT company with her husband, said she was shocked by the overwhelming support she’s received from the computer-science community.

“A lot of them say (they help out) because they didn’t get computer science when they were kids, and wish they did and they want to give back,” she said.

The project is based in Montreal, but it’s billed as a national initiative. They’ve been working with partners across the country to develop resources, especially the online portion of their offering. They want to pair schools with volunteers and develop online educational tools so that schools can start teaching students, without outside help. The team went to New Brunswick over the summer to teach coding to nearly 100 teachers.

In May, the Canadian Internet Regis-tration Authority, which manages the .ca domain name, gave the team a $48,500 grant as part of their Community Investment Program, money Kids Code Jeunesse is planning on using to beef up the “education” section of their website.

They will be holding a workshop at the downtown Montreal Apple Store this month, an initiative Arthur hopes will be copied across the country.

Their goal is to reach as many children as possible, she explained.

Arthur said that kids and their parents appreciate their efforts. She recalled one instance when, at an event at a school, a parent found her and told her that learning computer programming gave her son, who was new at the school and having trouble with his studies, a completely new outlook.

“She started to cry, put her hand on my shoulder and said, ‘You changed my son’s life,’ “ Arthur said.

For more information about workshops or to donate, visit kidscodejeunesse.org.