Did you know that March 1 is National Pig Day? Yup, a whole day dedicated to a farm animal best known for snorting and rolling in the mud. Who knew? However, the role of pigs in children’s literature is actually well documented and, in honour of this, I wanted to share a sample of the wide range of books that have this animal as a central character. 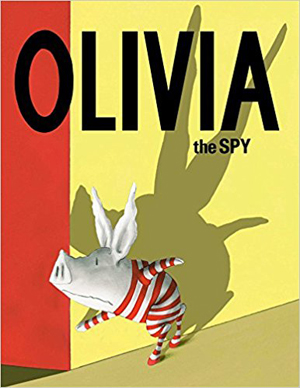 It has been more than 15 years since author and illustrator Ian Falconer introduced the world to his lovable character Olivia, a sassy New York City piglet. Through her many misadventures, Olivia waltzed her way into the hearts of readers who can’t help but love her penchant for unintentional trouble.

In her latest escapade, Olivia decides to become a spy so she can uncover what her mother’s plans are for her (this, after Olivia made a blueberry smoothie that splattered all over the walls). As usual, she relies more on her imagination than on facts and her shenanigans will have readers in stitches. Falconer’s minimalist use of colours and pencil drawings work perfectly to capture Olivia’s spunky attitude and allow her big personality to fill up the pages. This book continues the tradition of conveying to readers that as long as they use their imaginations, they will never be bored. 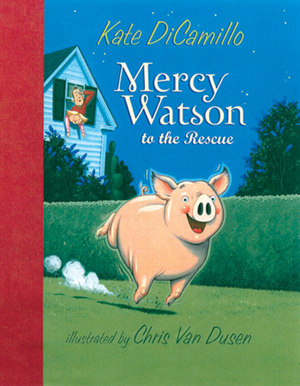 This is the first in a six-book series about a full-grown pet pig named Mercy by children’s author Kate DiCamillo. Mercy’s human owners, the Watsons, think she is a porcine wonder. Despite her large girth, they even let her creep into bed with them at night, which causes the bed to break. Mercy’s love of buttered toast and all things sweet get her into countless predicaments as she follows her stomach wherever it takes her. The Watsons are enchanted by Mercy and see each of her actions as a heroic endeavour. These troublesome situations will give rise to many laughs from readers as they see the difference between what the Watsons want to believe and the real motivations behind Mercy’s actions. What distinguishes Mercy from many other pig characters is that DiCamillo does not personify her, but rather writes from her perspective as a pig that is full of personality. Pet-lovers will recognize themselves in the Watsons who spoil Mercy, forgive all her behaviour and see her as a human. 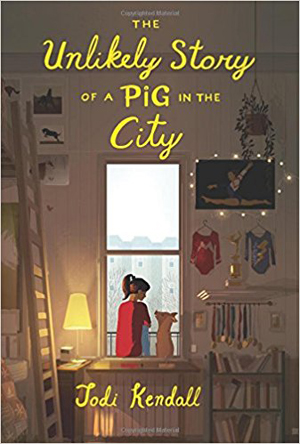 The Unlikely Story of a Pig in the City
(HarperCollins, $21)
by Jodi Kendall
Ages 8-11

This recently released novel highlights the special bond that can develop between humans and animals. Ellen’s parents are not impressed when her brother brings home a runt piglet because there is barely enough space in the small and cramped apartment for four children and a dog. Ellen, however, immediately feels attached to the piglet, which she christens Hamlet, and can’t help but want to save him. She does her best to keep him, but soon learns that having a pig in the city, especially as it gets bigger and bigger, is no easy feat. She is determined to protect her newfound friend but will she be able to find him a permanent home where he will be safe? Ellen is a budding teenager trying to navigate strong feelings and cope with the trials of living with a large, sometimes chaotic, family. Her relationship with Hamlet helps her through these tough times, and the little pig also brings out the enduring love of family. A tearjerker, the book harkens to Charlotte’s Web, paying homage to the book that first sparked our love for pig characters. 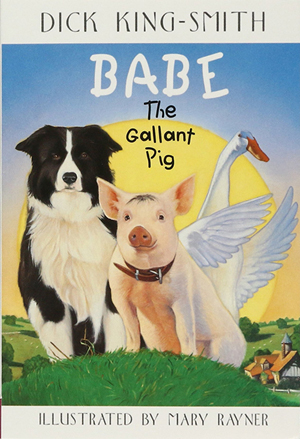 When we think of famous pig characters, sweet Wilbur from the classic children’s novel Charlotte’s Web immediately comes to mind. Equally charming is Babe, a young pig who arrives on a sheep farm after Farmer Hoggett wins him at a county fair. Hoggett sees little value in this animal, but Babe is determined to prove that he can contribute to life on the farm. When Fly the sheepdog adopts Babe as one of her own, she tries to teach him how to herd sheep. When Babe has little success, he decides to take an unconventional approach, politely asking the sheep to gather rather than barking orders. To his surprise, it works. In fact, Babe shows so much talent at herding sheep that Hoggett decides to enter him in a competition. Will they overcome the ridicule from other competitors and spectators who don’t believe a pig can herd sheep? The delight of this book is its feel-good theme about the importance of being your own person and embracing what makes you unique. Of course, the whimsical plot also adds to the overall amusement of the story, making this book a joy to read. Babe is an underdog hero who always stays positive even in the face of obstacles.