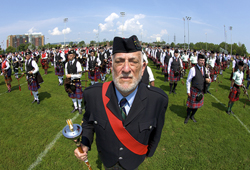 The Scottish have long and historic ties with the province of Quebec, especially in the city of Montreal. Whether it is building the Lachine Canal, constructing the first bridge across the St. Lawrence River or establishing the well-known McGill University, the Scots have undoubtedly planted strong roots in our city.

The 39th edition of the Montreal Highland Games on July 31 is set to keep the traditions alive by celebrating Scottish culture through music, games and medieval battles. All you need to bring is some cheer and enthusiasm to make this a great summer day.

Organizers say they have worked hard to make this a family-friendly event; kids’ activities will include their own mini Highland Games, four inflatable bouncy castles, face painting, highland dressing and medieval battles by trained professionals where kids can partake in play “combat” training.

Spectators will also have the chance to watch traditional heavyweight competitions like the caber toss, sheaf throw, hammer throw and putting the stone, which demonstrate the Scots’ impressive strength. This is in addition to highland dancing and pipe band competitions.

If you are not looking to take part in the events, but want to soak up all the Scottish culture, there will be a Celtic village where you can find a wide variety of merchants with clothing, musical instruments, jewelry, baked goods, culinary delights and Scotch sampling, along with pipe band, fiddle and harp performances.

For more information (or to sign up to compete), visit montrealhighlandgames.qc.ca.