Orlando beyond the major theme parks

Each year, hundreds of thousands of people head to Orlando and never step foot outside Disney World’s four theme parks. Although we adore Mickey and his friends, we decided on a recent visit to explore the other attractions in and around Orlando. Here are some of the fun activities we discovered in the “vacation capital of the world.”

With its enormous alligator teeth entranceway and gator wrestling shows, this 110-acre evergreen habitat and theme park is a bit cheesy, but it’s also a whole lot of fun. I’ll admit I loved it here. The pace is relaxed and families can enjoy each other’s company in the Florida sunshine rather than worrying about the logistics of fast passes and line ups. Hundreds of alligators and crocodiles, tongue-in-cheek shows, a train ride, a petting zoo and exhibits kept us entertained all afternoon. Our final activity was the ‘swamp walk’. The raised boardwalk took us through the everglade habitat and entertaining signs along the interpretive trail amused the kids. Cypress trees towered over us, providing shade and a glimpse of what Orlando looked like before the neon lights took over. 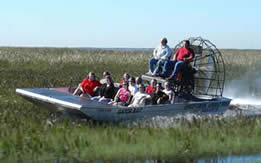 The beauty of the Florida Everglades (a subtropical wetland inhabited by various wildlife, including alligators) will unfold before your family’s eyes as these boats transport you through a grassy marshland to view Florida’s wildlife. Just 19 kilometres from the bustling Orlando, visitors to this area will likely see snakes and turtles as well as birds such as blue herons and sandhill cranes flying overhead. But it’s the state’s most famous reptile that stole the show, or certainly did for my kids. The first alligator we spotted basked lazily in the sun, seemingly unfazed by all the sudden attention and clicking of cameras. The guide tells us it’s about 5 years old and my 5-year-old daughter (Danielle) was thrilled by this lucky coincidence.
My 8-year-old son (Justin) was more impressed with the much bigger 30-year-old creature we saw next. It was huge and I tried to move us closer to the centre of the boat (to stay as far away as possible) but my son moved instead to the edge to get a better look. He thought it was one of the “coolest” things he had ever seen. Although Boggy Creek provides earmuffs, the boat ride is very loud and I wouldn’t recommend this for very young children.

The Encyclopedia of Space and the Star Wars Dictionary are my son’s favourite bedtime stories, so this complex dedicated to space exploration and NASA was a dream come true for him. Located 72 kilometres from Orlando, the Kennedy Space Centre is home to two launch pads, which have been the site of every U.S. human space flight since December 1968. If you do some research before going, your family can be one of the lucky people to actually see a live shuttle launch. But even if you miss a rocket blasting off into space, there is so much to do in the massive 70-acre facility.

There is a bus tour (included in the cost of admission) that takes you through the facility making three pit stops. First, there’s the Launch Complex 39 Observatory Gantry, where you can see the launch pads. My son was excited to see an actual rocket on the pad. Next is the Apollo V/Saturn V centre, which has museum-type displays that pay homage to the historic moon landing and space exploration. Looking at the actual consoles and equipment used while millions of people held their breath on July 20, 1969 gave a real sense of the magnitude of the accomplishment. Another highlight was the fully restored Saturn V rocket, which was used to send astronauts to the moon. It’s impossible to truly appreciate the enormity of this 363-foot rocket until you’re standing beside it. The final stop is the International Space Station Centre where you can glimpse the future of space travel. And by the look in my son’s eyes, he’s planning his future, too.

Another easy day trip is Blue Spring State Park, which is an ideal place to bring a picnic and hike along the trails. Located 48 kilometres north of Orlando, the main attraction is the manatees, sea mammals that can weigh up to 1,000 pounds. During the winter months, these incredible gentle giants take refuge here in the waters warmed by the underground springs. On our visit, one swam right up to the viewing platform we were standing on, poked his head out the water and almost seemed to be climbing the stairs to see us. Actually, it was munching on some seaweed along the rails, but it gave us a thrill that Seaworld couldn’t come close to. The cost of this priceless wildlife encounter was $6 for all of us – considerably less than the price of a souvenir photo at one of the theme parks.

It’s easy to get swallowed up by the sheer size and impact of Disney when you head to Orlando. But families who want something a bit different — with at times a lower price tag — will find that exploring the city’s other attractions yields some wonderful memories.

More than 200,000 square feet of interactive programs and activities. The ever-popular Kids Town exhibit allows children to climb a tree, crawl underground and even turn oranges into orange juice! Dig for dinosaur fossils at the DinoDigs: Mysteries Unearthed exhibit and stroll through the fascinating Florida Everglades exhibit. www.osc.org 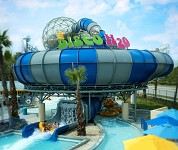 Wet ‘n Wild is a massive water park that is open year-round (with pools heated seasonally). It is centrally located on International Drive and a short drive from Universal Orlando and Sea World. So if it’s a hot day or you just need a break from the theme parks, you maywant to spend a day cooling off. www.wetnwildorlando.com

The city of Orlando is offering a bevy of deals designed to woo Canadians south this winter. From now until April 30, Canadians can take advantage of more than 80 deals, including discounts at popular attractions and free room nights at hotels and resorts. For example, Boggy Creek Airboat Rides is offering 50 per cent off an adult ride through the Everglades and the Wet ‘n Wild Orlando water park has discounted admission. To take advantage of these offers, people may need to provide proper identification such as a passport or driver’s license. For more information, call (800) 551-2006 or go to www.VisitOrlando.com/Canada.