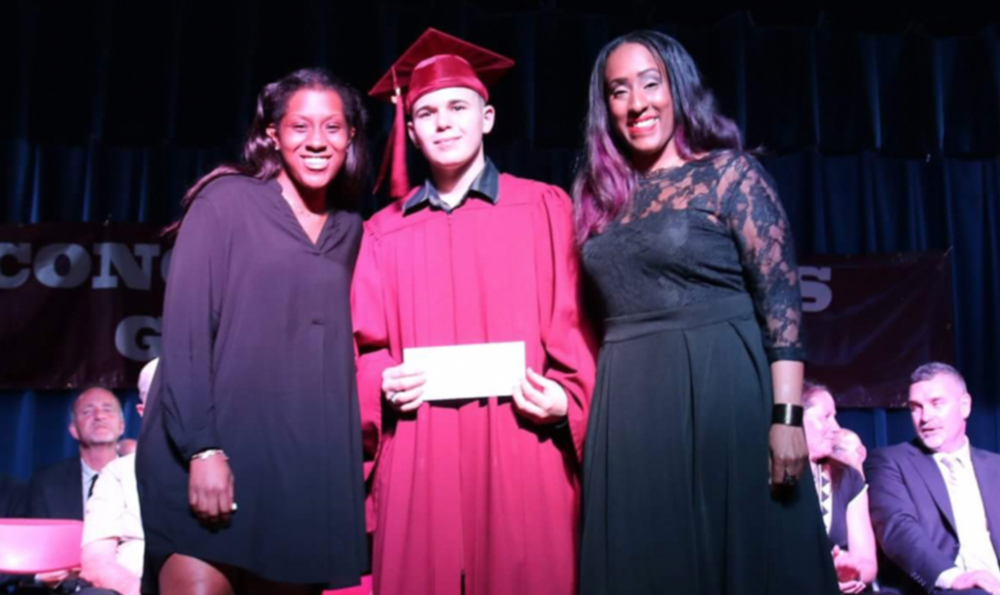 Sabi Hinkson was 16 and in her last year of high school when she learned she was pregnant with her daughter Kiara. Hinkson was a good student and always enjoyed school, but the physical and emotional toll of carrying a child while in high school was so great that she was forced to go on bed rest just a few months from graduation, and went into labour early due to the stress.

“It was devastating,” Hinkson said. “I had friends I had gone to school with since kindergarten, but I couldn’t graduate with them. I had to stay back a year to complete high school. So there I was, in Grade 11 with a baby. I had to go home at recess and lunch every day to breastfeed.”

As hard as it was to be the only teenager in high school with a baby in tow, it was even more challenging to complete CEGEP and then university through the toddler and preschool years.

At first, CEGEP felt so overwhelming that she quit mid-semester, but she returned the following term with renewed determination — albeit with a reduced course load. “I was bent on being like everyone else, but I had to recognize I was the only teenager with a baby in the whole program and I would have to take my time,” Hinkson said. “I had to realize it is what it is, this is my reality.”

Although it took her almost twice as long as most of her peers to complete her degree in biochemistry and theology at Concordia, Hinkson was determined not to let motherhood stop her from getting an education.  She eventually found work as a lab technician and science teacher, and even returned to school once more to pursue a Master’s degree.

Now that Hinkson’s daughters, Kiara, 18, and Taneia, 8, are beyond the demanding early childhood years, she is focusing on helping other young mothers stay in school.

Last September, she founded the Strong Hinkson Organization (after her mother, whose maiden name is Strong, and her father, whose last name is Hinkson). The nonprofit organization fundraises to provide financial support like bursaries to offset the cost of school supplies and textbooks.

Hinkson also helps parents access resources as they don’t often have the time to do the research themselves. Many young parents don’t realize there are loans and bursaries for higher education, for example. Others don’t realize they could reduce their course load to make it more feasible to balance school and family life.

One of Strong Hinkson’s programs pairs single parents with sponsors to provide support during the holiday season. Last Christmas, the organization raised $400 for a parent in CEGEP who had been struggling to buy food for herself and her child. “The holidays are such a hard time,” Hinkson said. “Your kids are expecting the world from you for Christmas and you just don’t have the means.”

Hinkson uses Facebook as the main tool to share information and resources with young single parents, although she is also active on other social media sites and maintains her own website, stronghinkson.com. Facebook has been a powerful way to find parent-scholars in need and to promote Strong Hinkson’s programs, including financial literacy classes and special offers from local businesses. “Time is like gold for a single parent who is going to school, so the more resources we can offer on the Internet, the better,” Hinkson said.

Hinkson says she hopes to one day move the organization from her home to its own digs. She envisions creating a place that will welcome parents with their kids, with computers to study with and play areas for the children. It would also provide social opportunities by bringing single parents together, as they usually lead very different lives than their classmates.

Strong Hinkson provides single parents with role models and mentors who help them believe in their ability to juggle parenthood and schoolwork. Hinkson said the first and biggest hurdle is for single parents to believe university is still an option for them.

By building a supportive community for young single parents, Hinkson hopes to ensure no one has to face the challenge alone.