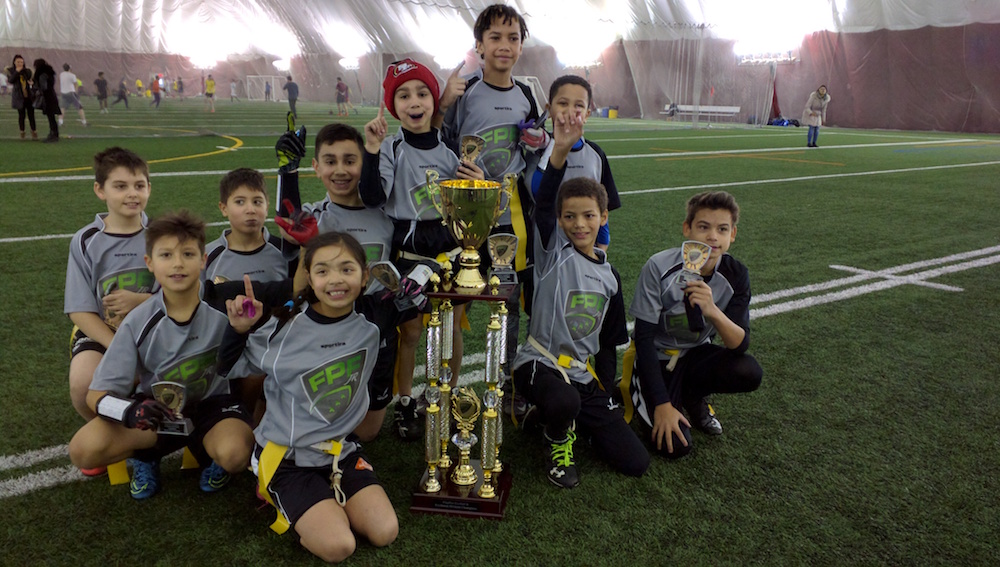 As the public learn more about the seriousness of concussion-related injuries, parents are increasingly reticent about signing their kids up for contact sports like football.

But in Montreal, kids can play what is called Flag Football; instead of tackling the opposing player with the ball, you have to remove the flag that is attached to the ball carrier’s waist.

Rob Campana, president of an organization called Flagplus Football, says he created a separate league for children because of the dangers that come with being tackled and the lack of city teams offering flag football.

Campana says the league is open to football players as well as children who just love the sport but were nervous about contact sports.  “We give those kids the chance to play the sport that they love watching, but with less physical risk,” he says. “Many kids who play play in the fall and are passionate about the sport want to continue over the winter and into spring.”

The league welcomes newcomers by offering free practices in November for kids who would like to try out the sport. “Kids can come practice once or twice and if they decide it’s not the sport for them, they don’t have to sign up for the season,” Campana says. “Coaches guide kids who are new to the sport and at the same time they evaluate kids to fairly balance the teams.”

The league has created specific rules and strongly encourages coaches to let every kid play, no matter what their skill level. For example, the team with the ball is only allowed one running play per possession to avoid a single player from taking control of the game while the other kids watch.

Campana says the league also offers a media component, which is unique among other flag football leagues. For instance, the junior league has writers who cover teams and provide personal statistics of players, which gives them the chance to feel like young professional athletes. “The writers are inclusive; they give kids a shout out and shine a light on everyone as much as possible,” he says.