Families looking to stay active in the cold winter months may want to check out iSaute, a new indoor trampoline park in Laval. The centre, which bills itself as the first of its kind in Quebec, features more than 10,000 square feet of interconnected floor-level padded trampolines. iSaute also boasts a large open-jump area, a trampoline dodgeball stadium, basketball dunk centres, Olympic foam pits for aerial tricks, a slack line and an area for little jumpers under age 6.

Natalie Lundquist, who co-owns the centre with her husband and several partners, said that parks of this type have been gaining in popularity across the United States with people of all ages.

“It’s really something the whole family can do,” she said. “If you’re old enough to walk, you can jump. But adults love it too. Most of them say it makes them feel like a kid again.”

She and her family moved to Quebec from Idaho, where they own a similar centre. Lundquist said she wanted her kids to experience life in a different country, and saw a chance to introduce the trampoline park concept to a new market.

“During a long, snowy winter, you need a place to go and have fun,” she said. iSaute visitors have to sign a waiver, but Lundquist said that jumping is very safe as long as people follow the rules. The trampolines are at floor level and padded, and small children have a separate area. Employees keep an eye on jumpers and at least one person working per shift has first-aid training. 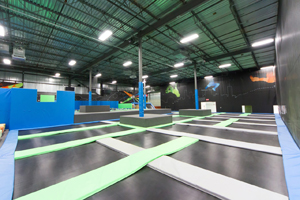 The centre’s birthday-party packages, popular with kids and adults alike, include jumping time and a room for cake. Although the owners plan to introduce trampoline fitness and basic trick courses, Lundquist said they do not plan to offer training to people who want to compete professionally.

Later this year, Lundquist and her partners are planning to expand and open iSaute locations in the West Island and the South Shore. After that, their sights are set on Quebec City. “It’s just great active entertainment and family fun,” Lundquist said.

It is located at 2045 Dagenais Blvd. W., in Laval. Jump time is sold by the hour and ranges from $12 to $14 for the first hour. There are family specials on Monday nights and special rates for kids 6 and under (with their parents) on Thursday and Friday mornings.