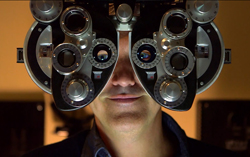 Fans of documentary series have been a spoiled bunch in the last few years. First, BBC’s epic Planet Earth series wowed – and educated – audiences on the wonders of the place we call home. Then, astrophysicist Neil deGrasse Tyson literally went deeper and closer, teaching audiences about molecules, light, rays and electricity, and even further, by taking viewers to space, too, with the FOX series Cosmos: A Spacetime Odyssey.

Now it’s bestselling author Steven Johnson’s turn in the new six-part PBS series How We Got To Now, premiering at 9 p.m. on Oct. 15 with the first two episodes, “Clean” and “Time,” airing back-to-back. How We Got To Now will shine a light on the unsung men and women responsible for innovations and inventions that make modern life much more convenient.

In “Glass,” for example, the third episode of the series airing on Oct. 22 at 10 p.m., Johnson goes to Venice to meet a descendant of Angelo Barovier, the first person to create crystal-clear glass. The repercussions of Barovier’s invention are far-reaching and, without it, lenses and televisions would not have seen the light of day.

Johnson is the author of eight books including 2010’s Where Good Ideas Come From: The Natural History of Innovation, one of the best books of that year according to The Economist. Entertainment Weekly magazine chose Johnson’s The Ghost Map as one of its best books of 2006.

How We Got To Now is sure to be educational, accessible and entertaining.  The next three episodes, “Light,” “Cold” and the finale “Sound,” will air on subsequent Wednesdays at 10 p.m. until Nov. 12.

For more information, visit pbs.org or watch the official trailer below.