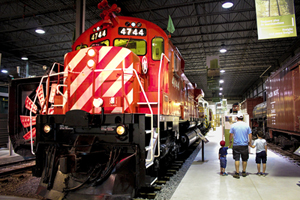 About six years ago, three teenagers died when they were hit by a train in the Turcot Yards. Last year, a young woman was struck by a train while walking home from work. She lost both her legs and most of her fingers.

It’s those kinds of horrific accidents that Exporail, the Canadian Railway Museum, and Operation Lifesaver, a national public rail safety program are trying to curtail with a new permanent exhibition on railroad safety.

The exhibition opens April 30 to coincide with Rail Safety Week. Visitors will experience simulated scenarios around railway tracks. There is an interactive circuit for young children that will help stimulate their motor skills, imagination and senses, and a display documenting the evolution of safety measures, regulations and innovations over the years.

“There are too many injuries and deaths every year,” said Stephen Covey, chair of Operation Lifesaver. “In 2014, nearly 300 collisions and incidents occurred at level crossings or during intrusions on private railway property. We want to educate the population about dangers around railways and to play a role in reducing the risks.”

The mission is to encourage conversations and educate people about both the dangers and the developments in safety measures in the 180 years since the first Canadian railway was built. For more information, visit exporail.org.