For 13 years, Laurie Wiseman spent her summer days at Camp Pripstein, first as a camper and later as a counsellor. When she heard the news earlier this year that the Laurentians’ landmark was closing after a 75-year run, she was profoundly saddened.

Fuelled by nostalgia and the desire to take action, Wiseman and Cory Pecker, a fellow Pripstein alumnus, will be co-directing a new summer camp opening at the same site: Camp Wingate.

Though deeply rooted in the Jewish tradition (campers will sing Hebrew songs in the dining hall and attend weekly Shabbat dinners), Camp Wingate is open to campers of all faiths. With its natural resources and outdoor facilities in the Laurentians, just north of Montreal, the camp will offer traditional activities, such as 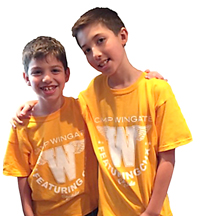 waterskiing, tennis, baseball, basketball, soccer and wakeboarding. And Pecker, a Calgary Flames draft pick, will run hockey games and free skate time at the indoor ice rink. There will also be artistic activities such as dance, drama and bead making.

For more information and registration, call 514-836-8999, or visit campwingate.com