If you’re looking for a way to keep kids entertained while they work on their French skills, a new app turns second-language acquisition into a game.

In Francomobile, a game developed with children ages 7 to 12 in mind, the Cooper family, siblings Thomas and Nanette (pictured below) and their parents Bryan and Sandrine, are going on vacation. Along the way, Nanette discovers a strange creature responsible for the technical problems they’ve encountered. The game centres on the family’s attempts to communicate with the computer virus.

Francolab, a web platform developed by television channel TV5 and designed to help people of all ages and skill levels learn basic French, developed the app, which is their first project specifically for children. It’s 20 to 24 hours of game time that includes 40 videos spread across eight modules based on themes such as food, clothes and animals.

Instead of the time-honoured dictée list, where kids sometimes don’t know what the words they’re learning mean, the game helps kids expand their vocabulary in an applied setting, says Francolab project coordinator Geneviève Lajeunesse. The kids learn words in context – so when Thomas, the older of the two siblings, declares he’s cold, he may ask for a “manteau,” for example. 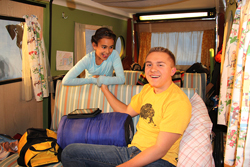 It was a truly Canadian collaboration – people from Vancouver to Montreal worked on bringing the animated game to life. The majority of the voice actors are Franco-Manitoban, whose accents are closer to what Anglophones learning to speak French sound like. Hearing that accent, Lajeunesse says, takes away the apprehension children may have about speaking French, since they may not sound like their French teacher or French friends.

Every element that appears on the screen can be replayed as many times as the child needs in order to understand. The activities get increasingly difficult and complex as the game goes on.

The app is free to download but only the first module is included. The other seven modules cost $5.79 each to unlock or can be purchased together for $21.99.

The first module comes with five videos and 100 exercises, and the other modules contain a similar amount of content. Lajeunesse said parents can get a good idea of how the game works so they can decide whether they want to pay for the rest of the content.

Though many of Francolab’s projects are designed with teachers in mind, Lajeunesse says Francomobile is aimed at parents who feel their kids need extra practice and who don’t want to park them in front of a TV to watch English movies dubbed in French.

The app is available in the App Store for third generation iPads and up.