Montreal students get a rare chance to perform with Symphony Orchestra

It’s not every day that children get a chance to sing songs backed by a full symphonic orchestra and record an album that will be sold around the world. But last year, 340 Montreal kids had that very experience thanks to a multidisciplinary musical project directed by professional opera singers and husband and wife duo Dimitris Ilias and Maria Diamantis.

The project brought together hundreds of students from 30 ethnic backgrounds and two different school boards to record music accompanied by the Orchestre Symphonique Pop de Montreal for a French children’s book titled Le temps des fleurs, le temps des neiges. The students’ songs make up five of 12 tracks on the CD that accompanies the book.

“Typically, only the top children’s choirs get the chance to sing with a symphonic orchestra, but we wanted to bring that experience to children who would not otherwise get the chance,” Ilias says “It was great to see their wide open eyes when they heard the track with real instruments. Just that was enough to justify this project.” 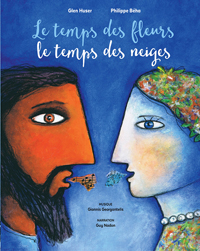 The book tells the story of why the seasons change through the myth of Persephone, a young and tenacious goddess kidnapped by a love-stricken Hades who takes her to the underworld. Her mother, Demeter, the goddess of earth and agriculture, is so overcome by sorrow that her despair causes frost and drought to permanently settle across the land. Hades is convinced to let Persephone be reunited with her mother for a few months each summer. At the end of their time together, winter falls once more.

“We felt that the story carries an important lesson; that a mother’s love for her child is so strong, it has the power to change the seasons,” Ilias explained.

In September 2014, 1,600 children in grades 3 to 6 from six schools in the English Montreal School Board, five French schools in the Margeurite Bourgeoys School Board and private Greek school, École Socrates-Démosthène, auditioned for the project. Ilias selected a few hundred children based on skill and whose schedules allowed them to take part in months of training. The youngsters spent much of their school year rehearsing during lunch breaks in preparation for recording in May.

Ilias said the project helped the children learn how to use their vocals properly and also taught them about what goes into a large-scale production. The participants were introduced to elements of sound engineering and illustration and got to see what goes on behind the scenes. He also pointed out that French was the second language of many of the children who participated, so they got the chance to refine their vocabularies.

Joel Ceausu, whose 9-year-old son Max attends Edinburgh Elementary School in Montreal West, said his son loved the experience and it helped him develop in unexpected ways. “It’s given him confidence,” Ceausu says. “He has showmanship in him and it reinforced his belief in himself. Max has always been creative, but this experience showed him another aspect of himself; he sees himself as a performer now, as someone who is able to do something beyond the classroom. ”

The project got a helping hand from famed Quebecois actor Guy Nadon, who narrates the book, and various professional opera singers perform solos on the CD.

The kid choristers now have a lot to look forward to – they will mark the book’s release with multiple performances in November, including two red carpet events – one at Montreal’s Le Crystal Hotel for the French schools, the other at Embassy Plaza banquet hall in Laval for the Greek and EMSB schools.

Finally, on Nov. 22 at 11:30 a.m., the entire ensemble will get together for the first time in public and perform at the Salon du Livre book fair at Place Bonaventure in front of hundreds people. The show is free, but there’s an admission fee for the book fair. General admission tickets are  $8, students pay $6 and it is free for children 12 and under accompanied by an adult.

Le temps des fleurs, le temps des neiges is now available in libraries and bookstores across the country, but you can also buy the book directly from one of the participating schools, in which case 35 to 40 per cent of the proceeds will go toward supporting that school’s music program.