Monique Polak’s latest novel for teens is about abusive relationships

Montreal author Monique Polak’s new young adult novel touches close to home in more than one way. Set in Montreal, So Much It Hurts (Orca Books, $12.95), tells the story of Iris, a 17-year-old in her last year of high school who falls for much older Mick, a mysterious theatre director from Australia. When their relationship turns violent, the overwhelming feelings of first love make it hard for Iris to walk away. Polak, who is also a freelance journalist and an English teacher at Marianopolis College, says the story comes from her own personal experience as a young woman in an abusive relationship.

How difficult was it for you to write this book?

In some ways it was easy to write this book, and in other ways, very difficult. Easy because I was drawing on my own memories of being a teenager in an abusive relationship, and difficult because those memories are painful and they brought back complicated feelings. In particular, I often felt sad and angry working on this story. I actually began taking boxing lessons while I was writing it, which inspired my next book about a girl boxer. (It’s called Straight Punch and will be out in spring 2014.) The boxing helped me a lot   I still take a lesson once a week and of course, writing So Much It Hurts also helped me make peace with that part of my past.

Montreal plays a big part in many of your books. How does the city inspire you?

I love Montreal! There are so many great things about this city — the linguistic and cultural mix, the different neighbourhoods, the food, the characters, the lively arts scene. I really do feel inspired by this city. Even the weather here makes for interesting story material! When I first started writing for teens, I thought I’d have more success by setting my stories in generic cities. But in fact, it’s been quite the opposite. I try to capture the city in the same way that I try to capture my characters. I want to bring the city to life in my stories, too.

Why do you choose to write for young adults?

I write for teens because I think they are the most interesting people on the planet. They are open to the world and to others in a way that many older people are not. Teens are figuring themselves out and that’s what makes them so interesting to me.  I get a lot of my inspiration from my students. Also, even though I’m 53 on the outside, I think I’m still 15 in some ways — still questioning, still figuring things out.

You’ve written 14 young adult novels. Where do you get your ideas from and do you ever fear you’ll run out of stories to tell?

I get many story ideas from my students. I also get some from my work as a journalist, reading the newspaper and listening to CBC, and even from listening to other people’s conversations. (I’m an extremely curious person.) I think that if you’re a person who loves stories, they come to you. The one thing I do not fear is running out of stories to tell.

What do you hope readers take away from your novels, especially your latest?

I hope that my novels will give readers of all ages the feeling that, if they access the courage they already have inside, they’ll be okay; they’ll get through difficult times. And afterwards, they’ll be able to tell good stories of their own, stories that might help other kids one day. With So Much It Hurts, I hope that some young women readers and perhaps some young men, too will recognize themselves and will take comfort in knowing they are not alone and that there is a way out of an abusive relationship.

Iris is blind to what is going on in her relationship with Mick (that’s why I called her Iris). She loves him “so much it hurts” (literally and figuratively). I hope teens will see that though the idea of losing themselves in a relationship is tempting, even exciting, it’s dangerous. I think that in a healthy relationship, we stay ourselves, we keep something just for ourselves. In my own life, writing has helped me do that.

So Much It Hurts is Monique Polak’s fifteenth novel for young adults. Her novel What World Is Left won the 2009 Quebec Writers’ Federation Prize for Children’s and YA Literature. Polak has been teaching English, Humanities, Creative Writing and Journalism at Marianopolis College for nearly 30 years. She is also a freelance journalist and columnist on ICI Radio-Canada’s Plus on est de fous, plus on lit!

To learn more about her books, visit her website at www.moniquepolak.com. 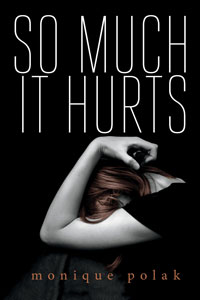 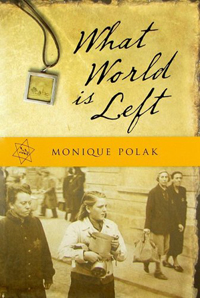