It came as sad news that children’s author and illustrator Maurice Sendak had passed away in May at the age of 83. Sendak’s books, particularly Where the Wild Things Are, turned children’s literature on its head by daring to show that children are far more complex than we often give them credit for. He had a knack for writing stories that combined goofy fun with serious exploration of the fears and insecurities harboured in children’s hearts.

Even in his old age, Sendak did not soften his approach to telling tales. His final book, Bumble-Ardy, published last year, features a pig who throws a birthday bash while he is home alone. Unfortunately, the party quickly gets rambunctious and a disaster is narrowly averted. Bumble, like many children, must learn that actions have consequences, a lesson that can only be learned through experience. It was Sendak’s great gift to be able to write stories featuring unconventional families, naughty children and the love and forgiveness that comes with making mistakes and experiencing all the ups and downs of life.

The inspiration and delight that Sendak gave to young readers is still felt today as parents reach again and again for his books. Here are two of his memorable titles, along with suggestions for stories by younger authors that reflect Sendak’s bold and amazing spirit. 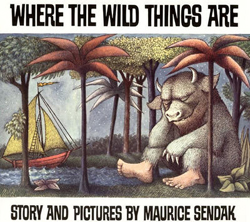 Where the Wild Things Are (HarperColllins Canada, $9.99)
by Maurice Sendak – Ages 4 to 7

In his famous book, Where the Wild Things Are, young Max gets put in his room for misbehaving. His imagination takes flight and soon he has sailed away to a wild, lush forest inhabited by oversized creatures who try to frighten and intimidate him. But Max wins them over and is crowned king of the Wild Things. At first Max enjoys his newfound freedom and power, but he eventually misses his home and returns with a renewed appreciation for his family. What made this book such a revolutionary treasure was Sendak’s ability to give life to Max’s feelings of anger and frustration. He tapped into the genuine struggle that children live through to understand and control their emotions. 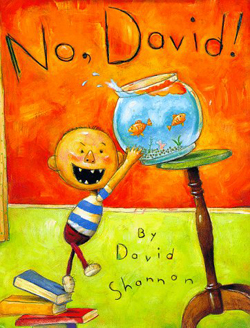 It’s not hard to see the link between Max and the young hero of David Shannon’s book No, David! The main character is a rambunctious little boy whose energy sometimes spills out in destructive ways. His mother is constantly telling him no, but she also never forgets to tell him she loves him. Like Max, David has some naughtiness in his eyes, but underneath he is just a little boy who is curious about the world around him and is out to discover as much as possible! 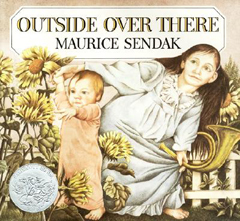 Outside Over There (HarperCollins Canada, $10.99)
by Maurice Sendak– Ages 6 to 9

In interviews, Sendak talked about how the kidnapping (and subsequent murder) of the Lindbergh baby in 1932 had deeply affected him and his family. You can see some of these fears at work in Outside Over There, which recounts the story of an older sister who at first is resentful of her younger sister, but then rescues the child when they are being chased by goblins. It is a beautiful tribute to the love that exists between siblings, no matter how different they may be. Once again, Sendak brought to the surface some of the feelings that we fail to acknowledge in children, such as jealousy and resentment. But it is a theme that has endured over the years, and appears in many children’s books. 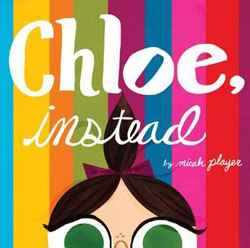 In a recently launched title called Chloe, instead, author Micah Player takes a more light-hearted approach to sibling rivalry. Molly, an older sister, is annoyed by her sister Chloe’s habit of eating crayons and book spines. But she soon realizes that Chloe will grow up looking up to her and that her sister is more special than she may have realized. Player’s bright and bold illustrations perfectly bring to life Molly and Chloe, whose big eyes shine with mischief, delight and love.