Last summer, I realized that my 9-year-old son, who had just finished Grade 3 with an A in math, didn’t truly know his times tables. Asked “what is 3 times 7,” it would take him at least a full minute
of deliberation before coming up with the correct answer.

“You have to know your times tables!” I told him. “Why?” he asked.  “You just do,” was my well thought out, wise parenting reply. “And this summer we’re going learn them.”

Let’s just say that my pronouncement was not met with joy.  “She’s ruining my WHOLE summer!” I overheard him tell his grandmother on the phone later that day.

Actually, I was only planning on ruining 15 minutes of each day. But I needed some tools, so I opened up my computer and began researching. To my surprise — and my son’s delight — we ended up discovering some pretty amazing resources to help in our quest for times table fluency.

One of our favourites became Khan Academy (www.khanacademy.org), a non-profit website that has delivered more than 166 million online lessons ranging from basic addition to advanced calculus (as well as other subjects besides math).

On the site, students watch short video clips in which founder Sal Khan explains a specific mathematical concept using a virtual blackboard. A first-grader might start with “Telling Time I” whereas a high school student could pick “Pythagorean Theorem I”.

For each lesson there are practice exercises, which are done until the subject is mastered.

There are flow charts and a detailed profile that display a child’s progress, including concepts mastered, videos watched and exercises completed. Students also receive instant feedback in the form of Energy Points, which can be used to buy avatars and badges. And no doubt it was this last aspect that got my son hooked.

“I just got 6,500 points,” he said enthusiastically the first time he tried the practice exercises. Soon, he had enough points to change his avatar from a green leaf to ‘Spunky Sam.’ As he worked through lessons, he got badges, which seemed to give him a sense of accomplishment and it motivated him to work well past the minimum 15 minutes I had insisted upon.

What I liked — besides my son’s enthusiasm for the site — was the casual accessibility of the lessons. Each video felt like you were sitting at the kitchen table, having a knowledgeable, patient person explain a concept.

While Khan Academy was our go-to site that summer, I also spent time exploring various mathematical apps that can be used on iPads and smart phones. Because these devices are so portable, they make learning and practicing an anywhere-anytime event. Here are some of the ones we enjoyed:

Motion Math: This award-winning series of apps can help children learn and practice a variety of math skills.  In Hungry Fish (free, but paid upgrades), kids must quickly add numbers in order to feed their fish. The Fractions Game ($1.99) follows a fallen star that must be returned to space by putting moving fractions in their correct place on a number line. And, if you are looking for a new way of visualizing math, check out Wings (free, but paid upgrades). The app displays numbers as groups of dots or in a grid pattern, with players having to figure out which is the largest number on the screen. This visual presentation helps with estimation skills.

Rocket Math ($0.99) has kids build a rocket to launch multi-leveled missions that range from counting and shapes, to decimals and fractions. 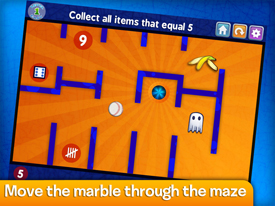 Mathemagics ($0.99) is for more advanced students who want to wow their teachers with their mental math. They can learn and practice mental math tricks to multiply as high as 20 x 20.

Marble Math ($1.99) teaches kids how to solve a variety of basic math problems as they roll their marble through a series of mazes. Bonuses and new marbles keep kids motivated.

Math Doodles ($2.99) introduces a range of mathematical concepts through challenges that have kids so busy thinking about strategy, they’ll hardly know they’re learning.