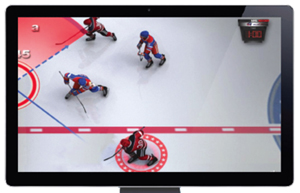 Most students doing math have, at one time or another, thought “when will I ever use this in real life?” Well, an interactive game that brings together hockey and the STEM fields – science, technology, engineering and mathematics – aims to answer that question, at least as it pertains to Canada’s national pastime.

Hockey Scholar was created in partnership with the NHL and its players’ association. It takes concepts such as surface area, volume, speed, energy and geometry and applies them to hockey using various activities.

Twelve modules (activities) need to be completed in order to help the Habs win the Stanley Cup. Each activity is classified as either beginner, intermediate or advanced. The game is aimed at students from Grades 5 to 8, but be warned: some of the advanced activities delve into concepts covered in high school physics classes.

Each module starts with an explanation of the task and then you make predictions by answering five questions to test your knowledge. After that, a video explains the concepts behind the game in more depth, and then the player attempts to complete the task (experiment). Afterwards, the students get a review of the terms and concepts they learned during each game.

A different expert from the team helps the player through each task. In the first activity, the arena must be transformed from a basketball court to a hockey rink. The player has to help the crew remove the wood panels on the floor by calculating the area of each section. A video walks the player through the process of converting the arena for different events, and explains the concept of area and why it’s important.

Once the ice is ready, the player has to paint the lines on the ice, which brings in the concepts of geometric shapes and line segments. They also talk about how the lines and circles they’re drawing relate to the game of hockey. For example, after being guided to draw the centre line, the player learns that the line divides the rink in half and is used to call infractions such as icing.

The game also includes “off-ice activities:” videos about different aspects of hockey, from the job of the equipment manager to how a hockey broadcast gets on TV. There are also printable PDF versions of each lesson available for download.

The game is supposed to take about three hours to complete. For each activity, after three wrong tries, the player is given the answer and allowed to move on. However, there isn’t much in the way of explanation as to why the answers were incorrect, so it’s possible for a child to complete the game without truly grasping all the concepts being introduced.

But even if they don’t fully understand kinetic and potential energy by the time they win the Cup, at the very least they will have been exposed to the terms and hopefully will remember the roles that math and science play in their favourite sport.