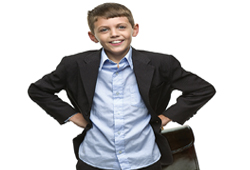 This summer, Canadian Lawyer Magazine put out its annual list of the top 25 most influential lawyers in this country. One was Aboriginal, the rest were white.

It’s widely believed in the Canadian legal community that while our country prides itself on being a diverse, multicultural country, that diversity is not reflected in our legal system as well as it could be.

Eight years ago, McGill University’s Faculty of Law, one of the country’s top law schools, came up with an outreach program to help improve ethnic diversity in Canada’s justice system.

The High School Outreach Program, now called L.E.X., pairs a group of law students with various schools in the Montreal area in the hope that teaching them about law will inspire them to pursue a post-secondary education, and possibly apply to law school.

The name change reflects the goal of the program, to talk about the law (L) in an educational (E) context and help students make connections (X) between law and higher education.

“We try to make the high school students realize that they have the skills needed to become lawyers,” said Ali Martin-Mayer, assistant dean of admissions and recruitment and L.E.X. program faculty advisor. “They are able to think of a problem critically, they are able to articulate arguments and present them. What we do as lawyers isn’t rocket science so it’s empowering for them to realize they have what it takes if they are interested in this field.”

Each year, between 40 and 60 law students sign up to be facilitators and do a training session to prepare them to go into classrooms.  In teams of four, they come up with interactive workshops, including mock trials, where they split the students into teams and prepare cases as the defence, crown and judge, then argue them. If it’s a real case, the facilitators share the outcome at the end.

In total, they visit 200 to 300 high school students a year, four English schools and two French schools in the Montreal area. The students are usually in grade 10 but are sometimes in grade 9 or 11 – each school makes that decision independently.

The facilitators visit the schools at least twice per semester, depending on the school’s scheduling.

Kalev Tamm participated in the program for two years, once as a facilitator at Kahnawake Survival School and once as a co-coordinator. He said he was interested in joining the program because he had previous experience working with kids, and had participated in a similar program when he was in elementary school.

The lessons he gave were structured around policy issues such as assisted suicide and cyberbullying. Tamm says he was intrigued to see that the students came up with the same solutions to the policy issues being presented to them as politicians had.

Part of the facilitators’ role is to answer questions about how they got into law school, their university experience and how many years it took them to become lawyers.

“I always stress that when I was in high school, I really wasn’t too interested in academics,” Tamm said. “I think that really helps to show that even if they’re not super into school now, the topics you study in university are so interesting and challenging that they might find something that motivates them later on.”

Since the program deals with minors, it’s complicated to follow them through their academic careers and assess if the program has had an impact on their choices.

But Martin-Mayer says the program isn’t necessarily about concrete, measurable results. “It’s more of a contribution to the community in the hopes that it will contribute to decreasing dropout rates and increasing awareness about the law and citizenship in youth.”