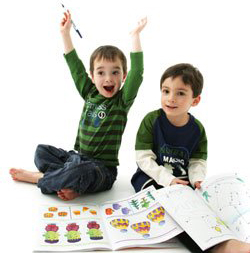 For the past year (and probably more), I’ve been talking about elementary schools to anyone gracious enough to listen to me. I’ve been asking other parents their opinion about public versus private, international or alternative, English or French. There are so many choices today, especially when you have English eligibility – the days of simply sending your kids to their local public school are long over.

One of my little obsessions (okay, it is a pretty big one) is that I want to make sure that Max grows up to be fluently bilingual. My husband is a francophone who speaks so well in both languages that most people don’t know whether he is English or French. I, on the other hand, butcher the French language every time I speak, messing up the “le” and “la” so much that sometimes I just skip the article completely and jump straight to the noun. Or I speak really quietly in the hope that people won’t hear my mistakes. But I digress.

When I started down this path, I just presumed Max would go to French Immersion at Willingdon School in N.D.G. It is our neighbourhood school and the one I attended as a child. But conversations with my sister, whose kids go to this school, set off some alarm bells. She had told me she was surprised to see that kids in Grade 5 and 6 were struggling to speak French. It seems that after Grade 3, when the courses being taught go from being 100 per cent French to 50-50, some kids have trouble maintaining their fluency, especially the ones who aren’t exposed to French outside the classroom.

So we decided Max should go to a French school but that narrowed our options only slightly. In our area, there is the local French public school he is zoned for as well as an international school, an alternative school and various private schools.

My biggest struggle is that I don’t know the criteria I should be using to decide which school would be the right fit for Max. For example, if he was accepted into École Internationale (a very structured International Baccalaureate program with high academic standards) and Étoile Filante (an alternative school with no homework or formal testing and one that is less structured than traditional schools), I would have no idea which one would be better suited to him.

Dr. Vicki Veroff, a psychologist in Pointe Claire, created an organization last year called SchoolFinders that does educational assessments to help parents find a school that is the right fit for their child.

She says the decision about where to send your child should be based on various factors including your child’s cognitive abilities and personality. Although Veroff agrees that it is difficult to determine a child’s personality at the age of 4 or 5, she says there are some indicators that may help you determine which environment your child would thrive in.

She says that if your child is frequently bothered when there is a change of plans, this may indicate he prefers a more structured setting where he knows what to expect. She also says that if you find your child needs repeated explanations or may seem to be a bit of a slow learner, you are not doing them a service by sending them to a school known for superior academic standards. Also, she says that if your child has any type of speech or developmental delay, it is better to send them to a school in their mother tongue. And children with attention problems tend to fare better in a more traditional, structured environment.

For an objective opinion about your child, Veroff suggests that parents talk to the educators at their child’s daycare or preschool. “Ask them if your child seems happier during free play or during more structured activities,” she says. “If your child seems to wander around aimlessly or is asking what he should be doing during free play, this could indicate that he may do better in a more structured, traditional school environment.”

Kids suited to alternative schools tend to be self-motivated and independent workers. An example is a child who is good at solving problems on his own rather than always seeking help from adults.

Veroff says that after parents have done their research and gone to some open houses, they should then trust their instincts. “Think about how you felt when you went into the school — was it a welcoming environment? Did the kids seem happy and relaxed? Did the program seem interesting?

Veroff says she sees a lot of parents who are very stressed over this decision and she tells them that ultimately the average kid will probably do fine in most schools if parents are interested and involved in their childs’ education. “And remember, this is not a lifetime commitment,” she says. “If you find your child isn’t suited to a school, you can always switch him to another one.”

Finally, Veroff suggests that once parents have made a decision, they should take their child to the school well before the beginning of the year to show them around and even let them play in the schoolyard.

After gathering all this information, I will now spend some time visiting open houses in January and will try to figure out what the right fit is for Max. Another thing I know for sure is that I just want him to develop a love of learning and be happy at school. Stay tuned for an update about my decision.

For more information about Vicki Veroff, visit vickiveroff.com or call 514-683-7111.

Looking for a school?

Quebec Association of Independent Schools
An association of private schools in Montreal
www.qais.qc.ca • (514) 483-6111

Not sure if your child has English Eligibility?

Ministère de l’éducation
www.mels.gouv.qc.ca
(click on “English” in the upper right hand corner then on document “instruction in English in Quebec.”